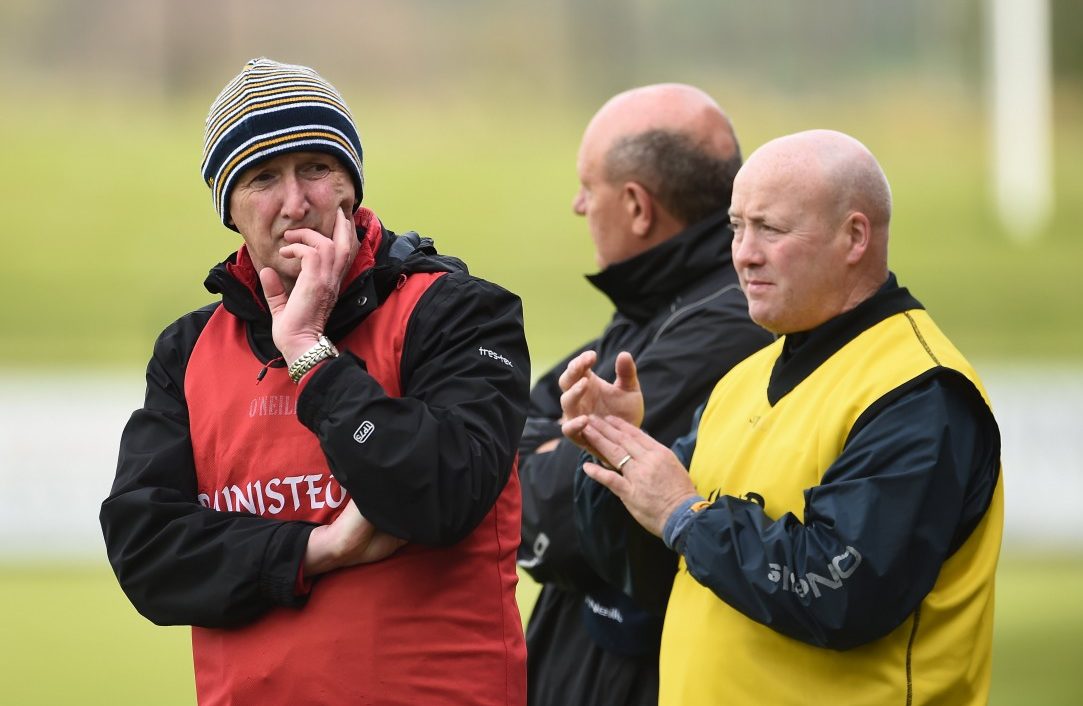 BIG GAME…The Anttrim management must find a way past Kildare

HAVING attended a number of championship matches in the Armagh Athletic Grounds over the years, I know that parking restrictions are sometimes in force in and around the ground.

The Kildare team driver would be well advised to check out the arrangements for Saturday before travelling to the Orchard county just in case access to the livery stables on the Umgola Road is affected.

I can only surmise that Kildare are travelling to Armagh in some kind of horse drawn cart, such is the travel time that they’ve set aside to get to the Athletic Grounds on Saturday afternoon. According to Kildare boss Joe Quaid, it will take his team two and a half hours to get to Armagh from Naas. Even the most conservative of drivers would make it in just over 90 minutes surely.

Quaid, was of course, exaggerating just a bit to make his point. The way he sees it is that his side won the Christy Ring Cup last week, and a week later are facing Antrim at what he sees as a ‘home’ venue for the Saffrons.

Quaid responded to a tweet by Anthony Daly who opined that the Kildare ‘hurlers getting a fair screwing too having to play In Armagh at 12.45 for promotion, 7 days after winning ‘ their ‘ all ireland. Surely could have been given a week if not automatic.’

Quaid replied: “It’s an absolute disgrace on bith (sic) fronts Dalo. But let’s call a spade a spade here. Croke park do not want Antrim back down in the Christy Ring. Neutral venue?? Naas to Armagh 2 hrs 30 mins. Belfast to Armagh 1 hour.”

Leaving the exaggeration aside, I have a fair amount of sympathy for Kildare. Lady luck has definitely shook Antrim’s hand on this one. Had it not been the inaugural year of the Joe McDonagh Cup, Antrim would already be relegated to the Christy Ring Cup. The relegation/promotion playoff (which I’m not in favour of as it’s unfair to the Christy Ring Cup-winning team) is only in place for the first year of
the competition.

Why? I have no idea. And If I was in the Kildare camp, I’d be fairly hacked off about it as none of the McDonagh, Rackard or Meagher Cup winners has to go through the same process to get promoted to the next tier.

Antrim can also be thankful to the GPA who proposed a motion at the 2018 Congress to the effect that the venue for all finals, semi-finals, and relegation play-offs in tier two, three, four and five of the All-Ireland hurling championship are determined by the Central Competitions Control Committee, as opposed to home advantage being given to the team trying to ‘win their way up’.

I have no doubt that the prospect of facing the Christy Ring Cup champions at a neutral venue is daunting enough for the Saffrons, given they will be facing a Kildare side that is now on an unbeaten run of five unbeaten championship games.

Kildare have put their poor early season results behind them having ‘sacrificed’ the Allianz League to blood a number players after the exodus of the imported talent that peppered last year’s teamsheets. All the men lining out for Kildare this season are homegrown, and so the highest standard most of them will have played is Division 2A hurling.

It should be noted however that the last time Antrim and Kildare met, it was in the 2017 Division 2A league campaign and Antrim won by just two points. The last championship meeting between the two sides was in the 2016 Christy Ring Cup when a Ciaran Clarke-inspired Saffrons cruised to a 12-point victory.

Antrim reportedly had just 16 at training last week and while I would expect the numbers to increase this week, it’s not a game that the Saffrons can take lightly. This is the most important game Antrim hurlers have played in years.

And there’s been some very important games for Antrim in recent seasons. Three Chrsty Ring Cup finals (including the ‘drawn’ game against Meath), and a league relegation playoff against Kerry at Parnell Park in 2015 to name a few.

They failed to win any of those games. I wrote after the Kerry defeat that the men from the Kingdom simply wanted it more. The build-up to that game and Saturday’s bears some similarities. Antrim went into the game on the back of a poor run that saw them finish bottom of Division 1B.

Kerry were on a high, having won the 2A final although Antrim were strong favourites and were expected to just turn up to preserve their Division 1 status. It didn’t turn out like that.

Antrim should win on Saturday, given the higher standard they have hurled at this year, but I think they’ll be made to work for their Joe McDonagh Cup status. Having won their opening two games of the Joe McDonagh Cup, many Antrim followers would have been expecting to travel to Croke Park on Sunday for the final. I know I did; and my club had already booked a bus for the under-12s and 14s. We’re now going to watch Carlow v Westmeath instead.

If Antrim show any complacency on Saturday, they could end this season as a Division 2A and Christy Ring Cup team. Had they made the most of their possession in key games this season, they could potentially have been lining out in Division 1B team in 2019 as Joe McDonagh Cup champions.

That’s what must be particularly infuriating for the Antrim management… too often they had greater percentage possession, greater number of chances – but ended up on the wrong side of the scoreline due to some atrocious decision-making in the final third of the pitch.

A 70-minute performance – or close to it – should see Antrim retain their McDonagh Cup status, but it really shouldn’t have come to this for the Ulster standard bearers.