AT the Golden Globes the other night, host Ricky Gervais, referring to Jennifer Lawrence's crusade for fairer pay for Hollywood leading ladies, said “Jennifer made the news when she demanded equal pay for women in Hollywood. There were marches on the street with nurses and factory workers saying “How the hell can a 25 year old woman live on $52 million?” The cameras swooped onto Lawrence, as she gave the sort of fake laugh you hear in court when the judge makes a joke. 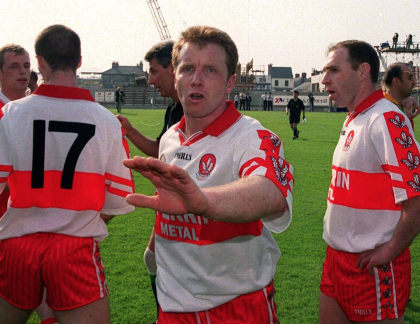 AT the Golden Globes the other night, host Ricky Gervais, referring to Jennifer Lawrence’s crusade for fairer pay for Hollywood leading ladies, said “Jennifer made the news when she demanded equal pay for women in Hollywood. There were marches on the street with nurses and factory workers saying “How the hell can a 25 year old woman live on $52 million?” The cameras swooped onto Lawrence, as she gave the sort of fake laugh you hear in court when the judge makes a joke.

Then there was the story last week about some Premier League soccer player who isn’t making the team and cheered himself up by buying a £250,000 Bentley. As Gervais was taking to the stage in Hollywood to present the Golden Globes, I was taking to the stage in St Canice’s clubhouse for an antidote to all that sort of thing: The awards ceremony for Dungiven’s reserve championship winning footballers.

The night was organised at short notice because full back Boozy Baz, aka Barry McReynolds, is emigrating to Perth. Let us hope he stays longer than Stephen Murtagh. I was at Stevie’s emigration party/wake in the Glen club many years ago and it was a most poignant affair. At the end of the night, a highly emotional Stevie took to the stage. Clasping the mike, tears rolling down his face, he pointed at the crowd, then his heart, before blurting out “You are my people. You will always be in my heart.” A fortnight later he was back home.

As I arrived into the clubhouse, Plunkett Murphy was setting out the chairs and tables. Plunkett has five senior championship medals. He was the greatest high fielder ever to come out of Dungiven and certainly the greatest I have seen. His brother Andy joked once after a league game at St Canice’s park that “Our boy was up so high, he saw Mary K Hinphey turning into Teeavin Road off the Main Street in her wee Volvo.”
Plunkett played at midfield for Derry and Ulster, soldiering alongside Brian McGilligan during the barren years. If he ever had a slump in form, I cannot remember him consoling himself with a Bentley. There he was setting the tables and carrying chairs.

Kieran McKeever was busy ladling out that classic GAA dish, chicken curry, coleslaw and chips. Kieran is the workaholic chairman of the club. Here he was checking the mic, helping to carry the karaoke machine up onto the stage (you’ve not heard karaoke until you’ve heard Sean McGlinchey singing “I should be so lucky”) making pots of tea and stacking the medals.
McKeever (and ask Peter Canavan if you don’t believe me) was the greatest corner back of the modern era. He was a zealot, who agonised if I scored off him in training. The next night he would come over and say “I know what you did Joe, I won’t flimming well fall for that again.” He never curses, instead saying “flip sake” and “flimming”. For a decade, he held Meath’s Bernie Flynn scoreless. He was a perfect mixture of balance, pace, power and skill. He was also unbelievably tough.

It is obvious that Cathal McCarron was brought on to get Emmet McGuckin sent off on Sunday. Emmet refused to say afterwards precisely what it was that Cathal did, and one’s imagination can truly run riot. It is an easy enough job if someone is prepared to do it. It also summed up a big difference between the ethos now and the ethos in our time.

Chatting about this with Fergal McCusker yesterday, we talked about how that sort of thing was dealt with in the good old days. We played Donegal in what was humorously described as “a friendly” in Banagher around 1991. At that time, it was daggers drawn between us. The inevitable row got up shortly after throw in when Anthony Molloy and Big McGilligan went at it in the middle of the field. Manus Boyle ran in with McKeever pursuing him. “Stay out of it Manus” McKeever warned him. It was good advice. Which the Donegal man ignored. Instead, he swung a punch. McKeever banged him with a heavy right hand. The only thing missing was a TV commentator to shout “Timberrrrrrrrrrrrrrrr”. Manus fell to the ground on his back, motionless. We gathered round him and watched as the blood came scooting out of his forehead like a Tarantino movie. “He fainted” said McKeever, as the ref ran in asking what had happened.

Two years later, we met them again in a league quarter final in Breffni. By then, they were reigning All-Ireland champions and we hated them even more. McKeever was brilliant that day as usual. With ten minutes to go, McEniff brought on Tommy Ryan who immediately started riling him, bumping, shouldering, elbowing and dragging him when he tried to run. I knew what was coming and in fairness, McKeever, as he explained afterwards, administered the standard warning. “Quit it Tommy, or I’ll flimming hit you.” Just before the end, McKeever turned and faced him. Tommy swung, McKeever ducked and boom. The big right hand and it was snoozy, snoozy time. “Timberrrrrrrrrrrrrrrrrrrrrr.”Tommy is a big man. He lay on the ground a good long time. McKeever was sent off. Which explains why the country’s best defender didn’t win an All-Star in our All-Ireland year. In those days, a sending off disqualified you from a gong. Cathal McCarron is lucky he didn’t play in the 80s/90s. Nowadays, players just grin and bear it. McGuckin might as well have been hung for a sheep as a lamb.

Eoghan Quigg was corner forward on the reserve championship team and it is always a shock to see his hair in the flesh. For Stephen Bandy McGuigan it was an occasion to savour. Having played for the senior footballers since he was 18, this was his first ever championship medal. He told me it was the greatest feeling he ever had. He also told me that after I wrote earlier this year that he was one of the funniest people I had ever met, it had “put a wile lot of pressure on me to be funny sir, I wish you hadn’t said that.”

The place was decked out in black and white. As I was leaving, Big Plunkett and McKeever were helping out with the dishes. Dungiven, a liberal socialist, non-sexist paradise.