THAT smile of Jimmy’s when he refers to “the Donegal management team” reminds me of Plutarch’s great line about Julius Caesar, whose smile, he said, was “like the glittering surface of the sea.” 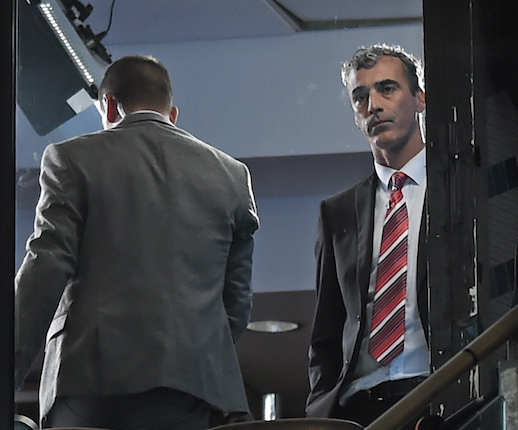 SHREWD EYE….Jim McGuinness is keeping an eye on things, including Donegal

THAT smile of Jimmy’s when he refers to “the Donegal management team” reminds me of Plutarch’s great line about Julius Caesar, whose smile, he said, was “like the glittering surface of the sea.”

The old dictator has been settling scores for a few years now and his polite assassination of Rory Gallagher in his Irish Times interview with Keith Duggan this week was one he clearly enjoyed. Having heaped pressure on “the Donegal management team” since he stepped down, saying amongst other things “Donegal are the team best placed to defeat Dublin” and “Donegal will win Ulster because they have the marquee forwards”, it is clear that he hasn’t much to learn from old Julius.

I wrote after the league game between us in March that Tyrone were now “ a fully armed football machine” and that they were “ ready to win an All Ireland.”

On Sunday, they began to show some of their potential. But more importantly, they showed that they are ready for war. In 2011, Donegal targeted Tyrone. The idea was to break them. To take them down. They brought fury to that game, as they had to, and just as Jimmy had planned, they broke them.

This was exemplified in the final quarter when Leo McCloone pole axed Joe McMahon with a heavy hit and Joe was carried from the field. As John Brennan is wont to say “ in championship football, you need to bone the bastards.” Donegal’s fury was the product of the right game plan, the right fitness, the right players and the right manager. Let us wind forward to last Sunday.

Now, it was Tyrone playing with absolute concentration and fury. That is to say, they refused to be beaten. There were no distractions in their heads. They weren’t diving or feigning, which are symptomatic of a team that does not believe it can win. Instead, they played the way Tyrone teams must play as they build a dynasty that will soon rival Kerry or Dublin.

Early in the second half, Colm Cavanagh came out with a ball and was hit hard by Anthony Thompson, who is a bull of a man. Thompson not only hit him hard with his body, but tackled him hard with both arms after the hit. Colm absorbed the hit, then shrugged him off, knocking him to the ground, before continuing on his run out of the defence. It was at that moment I knew Tyrone would not be beaten. A few years ago, Colm would’ve been down in an instant, holding his face and rolling in agony. Not any more. I have been saying for twelve months or more now that Colm Kavanagh has become one of the country’s most influential players and again on Sunday he was more or less awesome.

As for his big brother, awesome is not a sufficient word. In the first half, I thought “here we go again” as he was tied down and making no headway. In the second, when Tyrone were in that limbo where they could easily wilt, it was Sean who won the game.

In the replay of the first round against us in 2003, he lined out against Anthony Tohill. Anthony was at the very end of his career but was still a colossus of the game. Irish captain, multi All-Star winner, minor and senior All-Ireland winner and general all round legend. Cavanagh tore him to pieces and I sat there with Fergal McCusker thinking “ Holy f***.” It is scarcely believable that thirteen years on, he remains the driving force for his county.

I was very cross with him a few years ago after a series of games where he dragged men down. But that is gone from his game now. Instead, on Sunday, he gave one of the greatest performances he has given in a Tyrone jersey, perhaps the greatest. And I include in that his 2008 final against Kerry. Whereas in that game he was essentially unmarked, since although he was nominally midfield on Darragh O’Sé he simply attacked at will, on Sunday he was swarmed by one of the heaviest defensive set ups the game has ever seen.

A few years ago, when he was being hit by three men as he went to pull the trigger he would have been down rolling on the ground, settling for the free. On Sunday, for the crucial point, which is one of the best I have ever seen (my jaw dropped as it went over), he absorbed the hit as he took the shot. And that was the end for Donegal. Peter Harte followed up with a great score, but it was Cavanagh who won the game in that moment. He led. The others followed.

Tyrone’s strategy was well worked, but they didn’t execute their attacks with enough confidence and adventure, instead allowing Donegal to defend on the ropes for long periods, especially in the first half. That said, they will not encounter anything like that Donegal defence again. When they had no choice but to go at them with vigour and purpose in the second half, they looked superb. The trick is to do that all the time, rather than wait until you’re so far behind you’ve no choice but to do it. Like the Tyrone teams of 2003-2008. Dublin or Kerry will not be so generous.

As for Donegal, their system was far too one dimensional. They carried the ball forward, then turned to handpass to the supporting player running behind at the diagonal. So, they weaved their figures of eight like a rugby league team, hoping for a gap in the defensive line, but got nowhere because Tyrone had strung a line of seven or eight players across the fifty and were watching for exactly that. Tyrone refused to budge from that line, so Donegal were either turned over or reduced to passing the ball backwards, backwards, and backwards.

At one stage in the second half, entirely unable to make headway, Donegal passed the ball about in the middle third for 3 minutes and 23 seconds, which must be close to a world record. At no stage did Donegal mix things up. They never rotated Murphy to the square alongside McBrearty so they could kick long over the Tyrone line. They never tried to attack through the line at pace with a team mate in front of the ball. So, Tyrone weren’t kept on their toes and when the long-range points dried up, so did Donegal.

And when a young, unknown called Munroe pole axed All-Star Frank McGlynn, prompting the reflection that the apple doesn’t fall far from the tree , it was back to the future, and that day in 2011 when a young unknown called Leo McCloone pole axed All-Star Joe McMahon. Tyrone’s subs fizzed and scored and the overall impression was of a team that is only beginning to realize its potential. Tyrone for Sam.

Derry of course are waiting in the long grass. After the Tyrone, Louth debacles we needed a fillip and we have got it with two great wins over Meath and now Cavan.

Of course we are better than both those, but the trick is to show that. What a great sight to see my old team mates Damien Barton and Tony Scullion hugging after the game on the ground. At the final whistle, Tony ran at him and knocked him over like Fred’s pet Dinosaur in the Flintstones when he arrives home from work.

Since they took over, they have tried to play a more expansive game with half forwards in position but the three previous years of ultra defensive football are in the group’s DNA and it has been very difficult to shift. I do not know how many times this year Brian McGuckin has run along the sideline exhorting the half forwards to get out the field.

The second half performances against both Meath and Cavan show what we can achieve when we play with adventure and confidence. Positive football creates a great chemistry in a squad, as we can see with Tyrone after five years of defensive muck. We may not win the All-Ireland, but I am delighted for the group that we are beginning to turn the corner and escape from the self imposed gloom of pointless, ultra defensive football.
comment@gaeliclife.com