YOUNG athletes can suffer from the same sports injuries as adults. However, there are some injuries that are experienced more commonly in children and adolescents.

This is due to the fact that their bodies have not fully developed.

How children’s bodies differ from adults:

1. During growth spurts, the bones grow faster than the muscles and tendons can stretch.

This is called peak height velocity and usually occurs in males aged 13 to 15 and in females 11 to 13.

2. The tendons are weaker in children at the site where they attach to bones.

3. Towards the ends of bones, there is an area called the growth plate.

This is where the bones grow longer, but it is a weak point until the child stops growing.

Fractures or broken bones in children can be divided into two groups:

As the name suggests, the bone does not break but it bends.

The bones of children are more elasticated than those of adults.

It is most often seen in the forearm and shin bones. A cast or splint is still required but recovery is quicker than an actual break.

As discussed above, these areas are situated towards the end of bones.A bone can break through this line of weakness. Severe cases of this type of injury require realignment of the bone, to ensure no issues with further growth and development.

A common growth plate fracture site in children is in the hip, and is medically known as a ‘slipped capital femoral epiphysis’. The ball of the socket joint slips out of alignment at the area of the growth plate. It can occur in children aged 12 to 15 years.

A feature on examination is that one leg is shorter than the other.

An avulsion fracture means that a small piece of bone has been pulled away by a tendon or ligament.

For example, when you kick a ball, you use the hip flexor muscles which produce a lot of force.

The tendons of these muscles attach to the front of the pelvis.

It is at this site that the tendon pulls too much and a piece of bone breaks off, instead of the tendon tearing.

Perthes’ disease occurs when there is a poor blood supply to the ball part of the hip, called the femoral head.The bone becomes inflamed and weakens. Children complain of hip, groin or knee pain, and sometimes walk with a limp.

The good news is that the condition is temporary and the bone will regenerate over months to years.

The cause of this condition is unknown but it may be genetically linked.

It occurs in children aged between 4 and 10 years, and is five times more common in males.

Apophysitis can occur anywhere in the body where tendons attach onto bone. It is a traction injury caused by repetitive pulling of the tendon on the bone.

This causes inflammation, and over time the area of bone becomes thicker and more pronounced.

It is common during growth spurts when the bones grow quicker than tendons can stretch.

Common areas of apophysitis in children who play sport include:

Below the kneecap the patella tendon attaches to the top of the shin bone or tibia.

Pain is present when pressing on this point and there may be a small bony bump present.

Running, jumping and kicking can aggravate it.

Also situated below the knee cap but this time it occurs at the site when the tendon attaches to the tip of knee cap.

It is less common than Osgood Schlatter’s disease.

This occurs at the back of the heel bone where the Achilles’ tendon attaches.

Children will complain of heel pain when exercising and there may be redness present with a bony bump.

All of these conditions are best managed with icing, stretching and limiting activity until the symptoms settle.

As discussed, there are some sports injuries that are unique to children.

The main reason for this is that their bodies, particularly the bones and tendons are not fully developed.

This places them at risk of picking up injuries during times of growth spurts, combined with exercise.

Are you frustrated with injury?

Jonny Kelly is a chartered Sports Physiotherapist and owns Physio Performance in Belfast.

He has helped get world-class athletes back on the pitch and performing at their best.

Contact us for a complimentary Sports Injury Consultation at www.physioperformance.co.uk 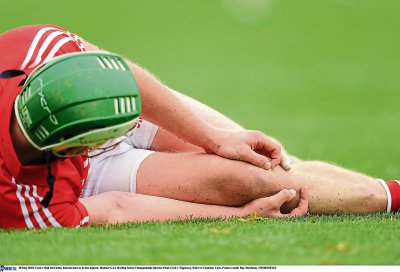