GIVE HIM A CHANCE...Steven Poacher wants to see new Down boss Conor Laverty given time to develop

THIS week Conor Laverty was announced as the new Down senior manager for the 2023 season. Most outsiders looking in at Down football often wonder what is going on and why can a county with rich tradition and history not be able to compete at the top table.

Let me take you back 15 years to a thriving schools scene with St Mark’s, Warrenpoint, under the guidance of Barney McAleenan, St Malachy’s, Castlewellan, with PJ McGee, and you had my former school St Columban’s, Kilkeel all competing in vocational schools’ competitions and winning at provincial and national level on a regular basis. Around that time, you also had St Louis, Kilkeel contesting ‘A’ competitions.

The reason I mention these schools in particular is because of a number of things. The personnel responsible for PE and sport in these schools drove GAA so passionately and hard, it was the number one sport. The level and quality of coaching and guidance these young players were getting from hugely experienced teachers and coaches was also second to none.

Most importantly, they were true Down schools. This is not an indictment of, for example, the Abbey or St Colman’s who also do sterling coaching, but the large majority of their teams are littered with Armagh players.

Barney McAleenan and PJ McGee’s retirement in the space of a year in 2007 and ’08, coupled with the loss of my former school St Columban’s, was a massive blow for development in Down.

It was a significant change. Priorities, it has to be said, change in a lot of schools. Good will from staff dwindles, Principals want a more inclusive and diverse range of sports on offer now and Gaelic games is no longer a huge priority in a lot of schools. This has a serious impact on players coming through.

I think of some of the great players and leaders who have come through all those three schools and the quality of coaching and opportunities to play our games that was provided to them. It ultimately led them to having good careers at all levels with Down.

Moving forward, I really feel the proper investment and time needs to go into our schools, that’s the critical time to nurture, guide and point the young players on the right pathway towards senior football.

There are so many more reasons why we haven’t competed recently. I know people will keep banging the old drum that the best players need to commit etc, but our leagues for example need to become teams of 10 again (which they will be next year, to be fair), but also simply played on a home and away basis with a bottom four and top four play off.

This means competitive football is on offer right until the end of the league where you could easily find yourself in a top four play-off or with a kick of a ball into a bottom four relegation play-off with just two teams in each division finishing in the limbo that is mid-table.

It really is simple, the more competitive club football is, the greater edge to games there is and the better prepared players are to step up to county standard intensity.

Coupled with a return to league play-offs, we must go back to a knockout championship immediately. The edge, drama, excitement and intensity of games would go through the roof and also while we are on the subject of it, a swap in referees from other counties – Down referees go to Armagh, Tyrone etc and other county referees come to us.

This would improve the experience for referees, allowing them to see different styles of football and improve standards all round.

These are maybe a few small reasons why Down’s fortunes might have taken a dip in recent years. Others will point to the old excuses of administration, lack of a base or a Centre of Excellence (which is hopefully going to change), lack of proper player commitment, or being one of the only counties without a head of athletic development.

Maybe there are other excuses about development squads. The quick fix at senior level taking priority over the under-investment in these groups in the past decade, who knows?

Whatever excuses are out there, it is now a new era at senior level. Laverty, who is a very enthusiastic, high energy coach, now takes the job albeit with no senior management experience at all, not even at club level, but I hope he gets a full opportunity to expenditure his time on his strengths, which is coaching.

As a former inter-county manager told me recently, it is so difficult now to manage and coach because you are managing so many things on the periphery, like extended panels, backroom teams, county boards, admin, media etc, it really is a complete full time job.

Down won’t be a quick fix, as Paddy Tally said jokingly in a recent podcast, “there is just so much going on in that county, the best I could have hoped for was to get out of it alive.” It is certain to take time and only time will tell. 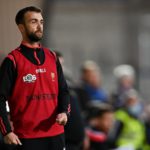