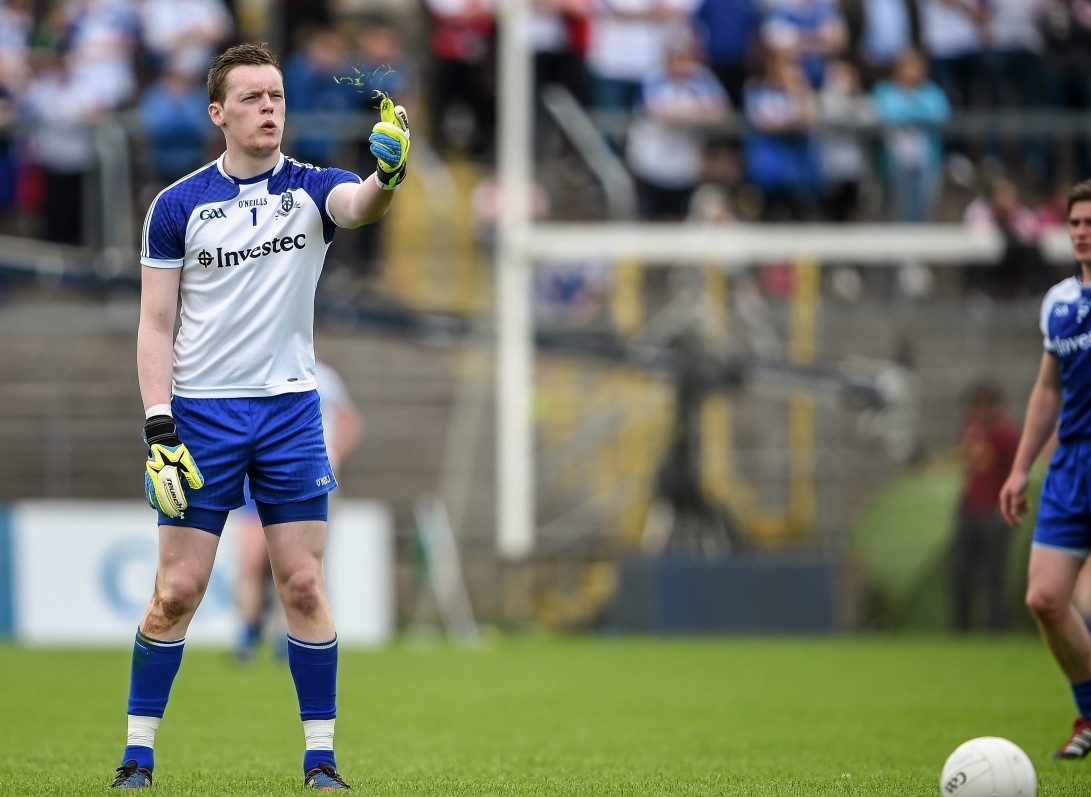 Last Sunday I was invited by a good friend of mine, Carlow manager Turlough O’Brien, to hold a goalkeeping session with his three Senior goalkeepers. With the O’Byrne Cup commencing in a few weeks, Turlough just wanted me to get them out and started back for the season ahead. He had asked me to work on a few things with them like their kicking, reactions and footwork. As well as these areas, he felt that they also needed to focus on their Communication, Composure and their Game Management skills. What this meant for me the coach was that the session would be both practical and theoretical in nature.

I got the ‘keepers out, put them through my goalkeeper activation warm-up which involves activating the various areas of your body/game that you will be using regularly during the session.

It begins with working the hands, allowing the goalkeeper to get the feel of the ball as well as establishing that vital connection between your brain and your hands known as hand-eye coordination. From there we moved on to exercises for activating the hip/core muscles. These are the most important set of muscles to warm up as they are the most frequently used when performing.

The next set of exercises focus on the diving technique using my ‘Pendulum Roll’ method for diving which minimises the risk of injury when diving while also allowing the goalkeeper to get back up to their feet without using their arms. The technique also affords the goalkeeper an introduction to ground contact which allows the ‘keeper to become accustomed to landing onto the ground before going into any drills and thus removing any anxiety or reluctance to diving.

From here we moved into the footwork part of the session using speed ladders and hurdles in different variations to work foot speed, speed of thought as well as good foot techniques. The ladders and hurdles were added into different game type scenarios that the ‘keepers may find themselves in during games which good footwork will play a key role in ensuring a positive outcome for the goalkeeper.

After working on their footwork, the session moved to working on their reactions. The purpose of the drill was to increase their reaction speed and decision-making ability. For the first drill the goalkeeper stood on the goal line facing three feeders who each had a ball of a different colour (Green; White; Blue) and were standing two metres from the ’keeper. One feeder counted in reverse; 3, 2, 1 and then called a colour. Once the count reached 1 all feeders threw the ball goalward, at half-speed, in any direction. The goalkeeper then had to hear the called colour and save the corelating ball.

Each ‘keeper completed one set of four reps and swapped round. To increase the difficulty of the drill I then made the goalkeeper close their eyes until the count reached 1, which meant that they didn’t see the balls until they were already headed goalward thus reducing their reaction time even further. After this drill we worked on their kicking and discussed their kickout options as well as their striking and technique. This concluded the practical part of the session.

The second part of the training session was conducted in the changing rooms and was theoretical in its approach. The main focus of this part of the session was to improve the goalkeeper’s Communication, Composure and Game Management skills.

1) What is Effective Communication?

For me Effective Communication involves the 3Cs. It must be CLEAR, CONCISE and CONSTANT. Whenever a goalkeeper is communicating on the field of play it must be audible and understandable (Clear), it must be specific and give defined instruction/action (Concise) and it must be relentless and unremitting (Constant). These 3Cs are governed by the 2Ts which are TONE and TWO-WAY. The Tone involves how communication is both relayed as well as how it is received. If something is communicated too harshly or in an unfavourable manner it will not be received in the most efficient way either.

It is also important that all communication is Two-Way meaning that once a command is relayed it is vital for the recipient respond either verbally or with a signal to show the message was received. The 3Cs and 2Ts are encompassed by LANGUAGE, both Team and Individually meaning that every team should have their own set of call/language which allows them to communicate with one another in an efficient manner. Any individual calls or phrases that the goalkeeper may use MUST be fully explained to their teammates so they can understand the actions associated with those calls.

2) How do you Compose yourself?

Composure is the ability to fully control one actions, thoughts and emotions. Whenever I teach Composure, I explain it is a matter of Give and Take. You give something to your performance, and it will Take something in return. I use the acronym U. A.D.A.P.T. to explain my principle on composure.

U is for Unemotional and by Giving an unemotional performance you Take Away emotions from your decision making (Less Impulsive).

A is for Attitude and by Giving a good attitude you then Take Action in everything that you do (Discipline).

D is for Decisive and by Giving decisiveness you Take Stock whenever decisions are being made (Informed).

A is for Accountable. Giving accountability means you Take Ownership for mistakes made (Honesty).

P is for Presence. Giving presence means you Take Charge of your performance (Control)

T is for Tenacious. Giving tenacity allows you to Take Up Arms and fight to be better (Fearless).

3) What do goalkeepers Game Manage?

Goalkeepers manage three main areas in Gaelic football; Restarts, Counter Attacking Structure (formerly Defending) and Attacking Structure. A goalkeeper is directly and indirectly involved in all three processes and as discussed in an article two weeks ago there is no longer any defending in Gaelic football. A team is either ‘In Possession Out of Position Attacking the Goal’ (IPOPAG) or ‘Out of Possession Into Position Attacking the Ball’ (OPIPAB). The ‘keeper role is to influence these three areas using three tools; Game Flow (game-pace; kickout speed etc); Game Commentary (Calls; Ball Position; player position) and Game Patterns (team play; opposition play).

All of these areas are grossly affected by communication and without communicating effectively they breakdown very easily. I enjoyed the session very much and hope the three ‘keepers did also as well as learning as much as I learned myself. It was a productive weekend and one that I wanted to share to the wider audience.