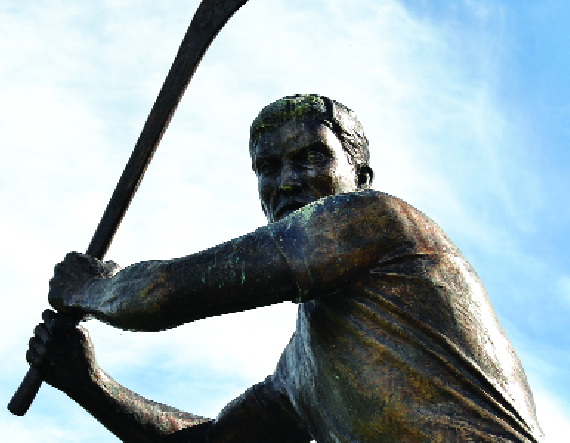 In June 1504 Michelangelo’s masterpiece, the statue David, was unveiled at the entrance to the Palazzo della Signoria (now Palazzo Vecchio) in the city of Florence. For over two years he used his exceptional sculpting ability to carve a magnificent piece of art from an ugly chunk of unwanted, weather-worn marble that lay rejected by other artists, including Leonardo Da Vinci, for twenty-six years.

In August 1501, at the tender age of 26, it was Michelangelo who convinced the Operai that he was the one to rework this piece of marble into the beautiful piece of artwork it was destined to be. The magnificent five metre Renaissance sculpture now stands as a symbol for strength and youthful beauty.

Legend has it, that among the many admirers and Florentines that had gathered to see the statue’s unveiling, one of the crowds asked Michelangelo “How in God’s name could you have achieved such a magnificent masterpiece from such a crude slab of marble?”

“It was easy,” Michelangelo replied. “The statue was always there, all I did was brush away the rough edges.”

As a goalkeeping coach it is vital to fully understand what exactly your role is whenever you’re taking charge of your goalkeeper’s development. For any ‘keeper the most effective way for them to learn is through self-taught experience. This is completed through position specific scenarios and constructive repetition to allow them to adapt, evolve and theoretically discover their own unique goalkeeping technique.

It is the role of the coach to act as an assistant to this process. A consultant, a confidant, an advisor to the goalkeeper in times when they feel stuck or lost in what they are doing. Even then, the coach will only provide selective information to the goalkeeper to allow them to figure out how to move forward with minimal prompting from the coach. This ensures that the goalkeeper develops self-awareness which is important for understanding their own personal ability and limitations.

The coach will ensure that they are more of a ‘Guide on the Side’ rather than the ‘Sage on the Stage’ meaning it is better to guide the ‘keeper in what they are doing rather than to tell them to complete their role in a certain way. Remember the goalkeeper can only interpret the advice and example you give to them and reproduce them in the best way that feels most comfortable for them.

Whenever you are coaching your goalkeeper do not be the first to explain what needs to be done. Ask probing questions to your ‘keeper to allow them to describe what it felt like, what they felt went wrong and how could it be improved. If the goalkeeper struggles or seems unsure of how to answer then, and only then, should the coach take over and explain what they think.

Again ask the goalkeeper if their thoughts coincide with yours and if they don’t deliberate further to find out what will be the best action going forward. In the end after everything has been explained you again ask the ‘keeper what will be the focus for the next repetition of the drill. This gives the goalkeeper a sense of control over their own progression and ensures that when they do experience dips in form that they are capable of dealing with this especially if the coach is not present to help them.

With this in mind it is vital to remember, in anything that you do with your goalkeeper, that as long as the core elements are presented by the goalkeeper then the technique used is irrelevant. Of course it is the role of the coach to assess the technique and remove any imperfections they see but ultimately the most important part is that the technique is comfortable for the goalkeeper to perform.

If the coach finds that there are core elements to any of the goalkeeper’s techniques missing, then time must be spent ensuring that these missing core elements are built into the technique to increase its effectiveness. This will require the performed skill being broken down into its micro-techniques with each stage being focused on until the ‘keeper can complete the full skill correctly with the missing elements included.

Humans are intuitive problem solvers and have evolved through the echelons of time by being able to adapt to every environment that they encounter. As a coach allow your goalkeeper to adapt in the same style by exposing them to as many game-type environments and situations as possible. By doing this it allows the goalkeeper to develop their decision making, allows them to make mistakes and learn from them in a proactive setting where constructive deliberation can take place.

Encourage your goalkeepers to self-appraise themselves on a regular basis, including training sessions and games. This again instils a sense of control over their own development to the goalkeeper and fends off any unwanted negative thoughts giving them a point of reference whenever performances are below expectations.

It also allows the goalkeeper the foresight in regards to what areas of their game they need to work on as their appraisal will highlight any areas which have been lacking. My 11 Goalkeeping Principles were designed as a framework for such appraisal to take place using them as a guide to what your performance should include.

So coaches remember, every time you receive a goalkeeper, picture the chunk of marble that Michelangelo was commissioned. Inside that marble there is a goalkeeper waiting to be unveiled to the world. Your job, like Michelangelo’s, is not to mould the marble into the goalkeeper you want to see, but to brush away the rough edges and allow the goalkeeper trapped inside the freedom to express themselves as they were destined to do. Be a sculptor of goalkeepers and create your own ‘Michelangelo’s David.’