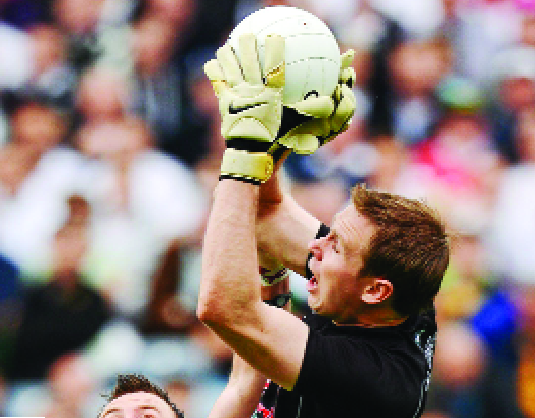 As a goalkeeper it is important that you are mentally the strongest person on the pitch.

It can sometimes feel like a very lonely and daunting place at times. Such is the nature of the game of goalkeeping. The majority of decisions and actions that a goalkeeper executes during a game usually goes unnoticed as they are not directly involved with the play. Positioning yourself for optimal start position, anticipating through balls or break through runners, position the defence into the gaps to stop attacks, reading systems/styles of play of the opposition and relaying them to your team and more. Indeed, most of the goals I have stopped I have done so with my voice and not my hands which is owing to effective communication during games. It is vital that a goalkeeper is confident in order to complete their duties competently.

My father had theorised that Gaelic football had evolved from using set positions and had grown to a more role-based model for each player. They had different abilities and characteristics required in order to play these roles as well as each role having a name to describe what the role required the most. For the goalkeeper, he had named him ‘Mr Confident’ as this was important especially considering that the actions of the goalkeeper are magnified in comparison to the outfield players.

In 2015, playing in a League game for Armagh against Sligo, I had badly staved my finger in the warm-up to the point I thought I had broken it. My warm-up was interrupted, and I entered the game feeling under prepared and not ready to play. I began to feel fearsome about making mistakes especially about catching as my finger was throbbing.

The fear took over and I had an error ridden game, we got well beaten and my confidence had taken a hit. In the ensuing weeks, I spoke with our ‘Mind Coach,’ Hugh Campbell, and we both concluded that an overwhelming state of anxiety had taken over my thought patterns and decision making. This was caused by not having appropriate mechanisms in place to counteract such feelings when they appear.

Repeat the process for four to five repetitions. After completing this breathing exercise the first time I nearly fell asleep it had relaxed me so much.

Fast forward almost 12 months to March 2016, another league game against our fiercest rivals Tyrone in a completely washed out Omagh. The game was simple, lose and we were relegated. Pulling up to the hotel for our pre-match preparations I began to feel the same anxiety feelings as before the Sligo match. I found myself a quiet spot and did my breathing exercises Hugh had taught me.

This calmed me until getting to the ground where the elements and condition of the pitch had me again feeling worried. Sitting changed for the game and looking around the changing room at my teammates I heard my inner voice begin to say, ‘Your teammates need you Paddy, they don’t know you’re worried. Be confident for them, if they see you scared it will grow in them.’

I made a conscious decision to ‘Lead By Performance’ ignoring my nerves and concentrate on playing well.

Once out onto the pitch I again took a minute and did my breathing exercises. My confidence grew but was still apprehensive about the soaking wet conditions the match was to be played in. The game started and I remember thinking if I get an early touch of the ball I’d settle. Lo and behold within the first few minutes, my first real meaningful touch was to be an under-hit shot which I had to high catch under pressure from an incoming Tyrone forward. With a helping block from Andy Mallon, I attacked the ball, caught it and from then the fear had left me and I was rolling.

We gained a last gasp draw with a goal from Niall Grimley right at the death, I kept a clean sheet and played reasonably well.

The game was a milestone for my development. I had taken what I had learnt from both my father and Hugh and out it into practice. I marked it in my memory as a game I played well in and when I get feelings of anxiety the catch I made is what I visualise to help me regain my composure.

Confidence is key to playing the goalkeeper position and even if you are feeling nervous or even scared, remember that is normal. It is important for you, as a goalkeeper, to develop your own mechanism that helps you when these feelings appear so as to allow you to regain your composure as quickly as possible.

Anyone can freeze during a game but, only those who are properly prepared know how to unfreeze during games. Just like kicking the ball or making a save, this must be trained and practiced for whenever the time comes for it to be used. Remember, whenever anxiety strikes ‘Be Mr. Confident!’