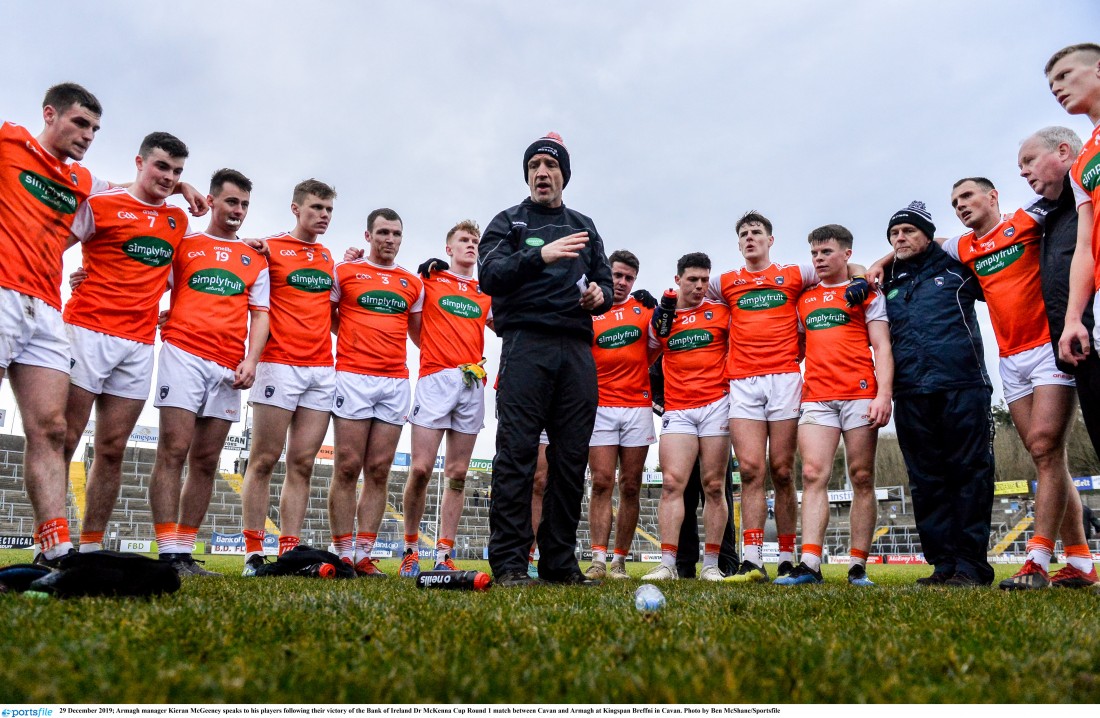 Back in 2016, three days before we (Armagh) were due to play Derry in our final Division Two National League game we trained in the Athletic Grounds in the city.

Like most sessions we ended with a number of games between the team. As we lined out, I noticed that within the opposition’s full forward line was Aaron Findon, Ethan Rafferty and Pearse Casey. Three lads who were very good in the air and dangerous under the high ball. Straight away I put the word out to the defence to expect long balls for this period of play.

The ball is thrown in, the opposition team wins the ball and it is launched straight to the square. Anticipating this I make a play for the ball and as my full back line wrestle with their men I rise high and collect the ball. Just as I collect the ball Pearse Casey unknowingly comes through the back of my legs and spins me causing me to fall toward the ground headfirst. Realising what is happening I tuck my chin to my chest and land onto the base of my neck with the weight of my body sending a crushing force down my spine.

Amazingly I get up, ball in hand, and lay it off to Sean Connell to clear my lines. Then BANG!! I drop to the ground gasping for breath and in severe pain from my unfortunate fall. I get checked by the team doc and then go on to hospital. It is there that the x-rays came back to reveal that nothing had broken.

On the Sunday we played Derry in a game we needed to win by nine or ten points to avoid relegation. During the game I took a heavy knock falling after being put under pressure from a Derry forward. My shoulder seized up and I could not move my arm resulting in me having to be substituted. The next day I went back to the hospital and that is when they had found that I had actually received a compression fracture of my T4 vertebrae. The doctor immediately ruled me out of all exercise for at least 12 weeks. The problem with this news was that we were due to play Cavan in the Ulster Senior Championship Quarter Final in ten weeks. Effectively the doctor was ruling me out of that game!

An appointment with a specialist was arranged and an MRI scan completed to get amore detailed inspection of the injury which would hopefully give a better prognosis for my return to play. Unfortunately, he agreed with his colleague and advised 12 weeks. What was most annoying for me was that I had no ill effects, no pain at all and had complete functionality but the medical team with Armagh were in a position were they simply could not go against the professional advice given to me by the doctors.

After six weeks of inactivity, I had endured enough and began working my way quickly back full goalkeeping sessions on my own away from the setup. After I was confident that I was ready for competition I discussed it with the medical team and gave full disclosure as to what I had been doing by myself. A second appointment with a different specialist was arranged only this time the specialist was an expert in tip tackles which happen in rugby and was the exact same mechanism of my own injury. After another scan and a short consultation, he deemed me in no danger from my injury and cleared me to play.

Cleared ten days before the crunch Ulster quarter final clash versus Cavan I was over the moon and excited at the prospect of fighting to win my spot back between the posts. Publicly I had been named to start but privately we knew the nod had been given to Paul Courtney, who for the ten weeks I had been out of action had been playing in goal and doing so very well including a number of test matches we played in the lead up to the championship game. Paul had also experience in playing the position and for the majority of the sessions leading up to the game trained with the goalkeepers to regain his goalkeeping touch. PC became an honorary member of the Goalkeeper’s Union.

On the Monday after the game, disappointed at not starting I decided to contact Geezer for a chat. I had debated with myself over and over during week leading up to the game whether to ring him or not but finally decided to do it and made the call. Obviously my first enquiry was to find out why I had not started the Cavan game. We discussed his reasons why and after hearing what he had to say I happily agreed that his reasoning was correct. I also asked what he thought I could work on to get back into the team and I also asked about what he thought of me. Needless to say the feedback he supplied me with was first class and really set me up moving forward, not just for that year but for the rest of my Armagh days and I still use it to this day both as a player and as a coach. I fully appreciated the levels of honesty he afforded me on that call, and I remember feeling really happy about myself for making the call.

Before the call I was feeling lost about where I stood in the team and what was keeping me out of the team. After the call I now knew exactly where I stood, what I needed to continue doing well and what I needed to work on moving forward. I also received an honest opinion from my manager which also gave me a great boost in my ability and allowed me to excel further in my game.

Recently I had a conversation with a young goalkeeper who had found themselves in a similar position. They had been working very hard in training, playing well in any games they got playing in and had also thought they had showed great commitment to the team which by their rationale had put them into the driving seat for the first league game. Unfortunately, they did not get selected and found it tough to comprehend. I told them the Cavan game story and the difficult conversation I had to have with Kieran and then advised them to do the exact same.

They took the advice and had a similar response to what I had whereby they got solid feedback and a renewed hope that they are not as far away from that starting position as they had first thought. It is always disappointing to hear another name called out in your place but it is important for your own growth and development as well as mental fortitude that you speak to your manager regularly about how you are performing, what you need to work on and where you stand in their plans. This is started with one simple question to your manager, that is “Can I Have A Word?”