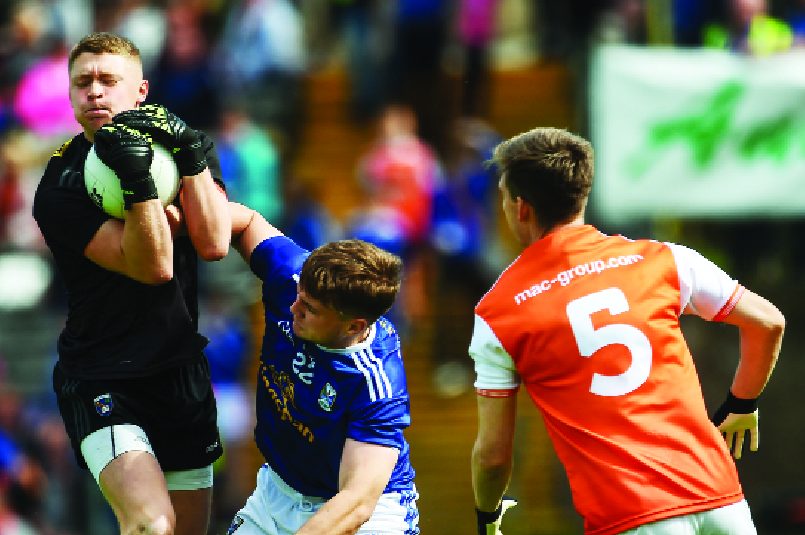 Last week, MacHale Park Castlebar saw the titanic tussle between Armagh and Mayo in Round Three of the All-Ireland Qualifier series. It was a tumultuous battle that came right down to the wire and in the end could have going either way. Throughout the game both teams had many opportunities to further their scoring tallies, none more so than Armagh. Now in defeat they will rue their missed opportunities whereas Mayo will continue to analyse theirs in preparation for the next game against Galway.

From a goalkeeping perspective both Armagh’s Blaine Hughes and Mayo’s David Clarke had, in my opinion, solid performances in regards to marshalling their defence, their Restarts and with dealing the different situations they were faced with. Both ‘keepers, like all ‘keepers do, will feel they could have done better for the goals they conceded. As a goalkeeper, this is only natural as with hindsight everything feels as if it should/could have been done differently. Every goal that I have ever conceded I have thought and still think I should have done better for each of them.

Whenever a goal chance materialises, the speed at which the modern game is played means that a goalkeeper is receiving game stimuli, processing that stimuli, using logic and past experience to make a cognitive response and deciding upon the most viable course of action to take to ensure the preferred outcome all within milliseconds. Add to this that the stimulus being received is constantly ever-changing and in different fields of the goalkeeper’s vision.

Making decisions in this environment on a regular basis develops into more of an instinctive mechanism rather than a reactive one because to try and use anything else will only slow the reactions and decision making of the ‘keeper. These are the fine margins that all goalkeepers must both accept and live with every time they take to the field. The goalkeeper’s thought processes must then always be in parallel or even ahead of those of the shooting forwards.

Therefore it can be said for a goalkeeper to have the edge over any shooter they are always trying to play in the immediate future or at the very least the immediate present. Doing this by using a combination of logic, training gains, player profiling as well as learnings from past experiences. Again, by using these methods it decreases the margins for error that a goalkeeper is permitted during a game. Once a decision is made by the goalkeeper they must see it through because indecision only causes mistakes and ultimately leads to costly results.

Ultimately, al that any goalkeeper can do is complete their processes to the best of their ability and trust that in the end it will have been enough to have stopped the ball entering into the goal. At the end of the day, the goalkeeper is still, and always will be, at the mercy of the shooter. It is the shooter that has control of the ball and it is the shooter who is awarded the final move in this one-on-one duel. It is the goalkeeper’s job to place as much pressure or anticipate where and when the shooter will make their move whether it be a shot, sidestep or lay off to a teammate.

On Saturday evening, both Blaine and David completed their roles for each goal chance to the best of their ability. Clarke for Armagh’s first goal chance correctly positioned himself off his line and towards Aidan Nugent but also in a position that he was covering Rian O’Neill for the pass across. From this position Nugent flicked the ball across to O’Neill who duly delivered to the net. Clarke’s misfortune being that he stumbled ever so slightly while closing down O’Neill.

For Armagh’s second chance at goal again Clarke positioned himself well and readied himself for Jamie Clarke’s shot, anticipating it to his right hand side he reacted as Jamie shot and got down at the same time as the ball was struck. He managed to connect with his fingertips and deflect the shot onto the post and the save was made. Being at the mercy of the shooter, anymore pace on the shot and he would not have made it.

For Armagh’s third goal chance, he spotted the danger and rushed Rory Grugan who was alone inside the 21m line. He forced Grugan wide and onto his weaker foot. Side pedalling to keep up he stays as close as he can and then pounces to try and block doing just enough to pressure the shooter to miss the goal.

Again being at the mercy of the shooter a better placed shot would see the green flag raised.

Take into contrast the fortunes of my former teammate, Blaine Hughes, who like Clarke completed his role correctly but with different outcomes. For Mayo’s first goal chance he rushed to a goal-bound Andy Moran, forcing him to struggle to lift the ball first time while also forcing him wide allowing the defender to get back into position. Once the defender engages Moran he retreats back to his goal.

Moran slips the ball across to Fionn McDonagh who, under pressure, shoots for the corner to Blaine’s left. In my opinion, Blaine anticipates this and has begun to shift his body in that direction but McDonagh’s shot is mishit to the centre of the goal. At this point Blaine tries to recover with his trailing right leg but unfortunately is unable to keep it out. As the shooter has the last action of the play his misfired shot ends up going central as opposed to its target in the corner.

For Mayo’s second goal chance Kevin McLoughlin breaks through the last defender and bears down on goal. Hughes closes him down very well and again anticipates the shot low to the corner. Just as McLoughlin is shooting for goal he is tackled by an Armagh defender which changes the trajectory of his shot. It lifts the ball high and floats it over Hughes head. As before, because the shooter has the final action on the shot any deviance from the shooter’s original decision, which the goalkeeper has anticipated correctly, makes it extremely hard for the goalkeeper to recover from quickly enough if at all.

It’s a position of fine margins and ultimately goalkeepers are always at the mercy of the shooter. They are in control of the ball and we as goalkeepers must react to their shot either by waiting for the strike or anticipating their actions. Sometimes it works and sometimes it doesn’t. The best option is to try and replicate as many game type situations as possible so as to ensure readiness for every possible goal chance that could materialise.

Finally, a special mention to my former Armagh teammates and management. The improvements they have been making over these past few years have been phenomenal. Heartbreakingly unlucky last weekend but the progress they are making both on and off the field are clear to see. I pray that Kieran and his staff decide to stay on and continue with the fantastic job they have completed over the past five years. It’s may well be a Game of Inches… but our future looks bright!!