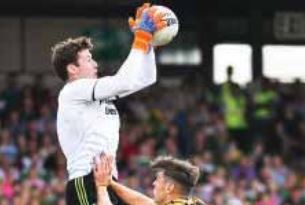 For a July Bank Holiday weekend, last weekend was very enjoyable. The weather was fantastic over the three days, there was minimal disruption for that time of year and best of all the feast of top level sport that was on show was absolutely top class.

From GAA to Tennis, Cricket to Hurling there was a fantastic mix of elite performers to satisfy any avid sports enthusiast. The skills, determination and entertainment on offer were simply brilliant, nowhere more so than both codes of the GAA.

It was the first round of this year’s ‘Super Eight’ series and the standards brought by all the teams involved over the weekend were high.

The four winners of Dublin, Tyrone, Donegal and Kerry all won their respective games comfortably showing their superior industriousness, skill and ruthlessness.

Yesterday Kerry were immense in their victory over a somewhat tiresome looking Mayo which had Pat Spillane gleefully declaring that Kerry had re-found their “Mojo,” something the Kerry native explains that his beloved County will need if they have any aspirations of halting the Dubs’ drive for five.

As I re-watched the weekend’s action on Sunday night, one thought came into my head in regards to the four victorious teams. For each of these teams, their goalkeepers had played commanding performances in their victories.

Cluxton had his usual high level performance that has become a consistent trait of his game. His kicking and leadership on the field is paramount to the Dubs’ overall strength as a team. Morgan was his usual industrious self, orchestrating everything from crease as well as creating attacks with his intelligent play both from restarts and being in possession of the ball. Relative newcomer Shaun Patton may have had
the busiest day of the four but his saves, pinpoint accurate restarts and high fielding were important for Donegal to get the win. Kerry’s Shane Ryan had a somewhat less eventful day but his professionalism in his restarts and penalty save ensured that Mayo never found a springboard back into the game.

Special mention must also go to Mayo’s David Clarke, who despite losing on Sunday, had an exceptional game against Kerry. Indeed, if Clarke had of played with the same intensity as some of his teammates, the winning margin for Kerry would most certainly have been a hell of a lot higher.

Clarke saved Mayo on a number of occasions and was his confident self between the sticks.

This is not to say that the other three goalkeepers had bad games or even that they did not put in worthy performances. In fact, each ‘keeper that played over the weekend would be happy with their overall performances.

These five however, for me, played with confidence in their ability, played without fear of consequence, with a small level of swagger with enjoyment for their play.

These five had what Pat Spillane had alluded to about Kerry. They had found their ‘mojo’.

For any goalkeeper playing at any level it is important to find your own mojo for whenever you playing during games. Playing within this zone creates a fluidity in your play as well as optimises the ‘keeper’s decision making as while in this zone you consistently act upon your first instinct and ultimately have a far more competent game.

If a goalkeeper wants to find or even create a ‘mojo’ the most important trait they must have is belief in their own ability. This comes from understanding what your abilities are as well as knowing what your limitations are in terms of performance.

It is important to accept both abilities and limitations so as to strengthen you mentally. Always ensure that once you know your strengths and limitations that you work on them specifically with the intentions of improving them as much as possible. This in turn increases your confidence through repetition in the skills that you are using.

Another way of optimising your performance is to visualise your performance before you take to the field. Of course, what exactly happens during the course of a game cannot be known beforehand but you can run through the different types of situations you may find yourself in like what you will do if there is a high ball, if there is a one on one, visualise your restarts and the forwards pressing your team. By
going over these situations in your mind’s eye before games it makes them less daunting if they do materialise.

Always welcome expectation and never shy away from being expected to play well. If you are fortunate enough to be able to become consistent in your performances which then creates a persona around you and your play, then embrace it, accept it and nurture it. Ultimately, it is a compliment not a pressure.

When people expect you to play well every game it is testament to the mental fortitude you have created for yourself to forget about playing well and just simply performing your role to the best of your ability.

To do this effectively, learn to set yourself realistic and attainable goals both for training and games.

Ensure these goals will also test your abilities but not so much to have a negative impact on your game. Make sure that these goals are measurable in some form and that you record these regularly in a training diary so that you can use self/peer appraisal to systematically review your performances over time. This can be done with yourself, other goalkeepers and/or your goalkeeping coach or management team.

Whether Mr Spillane was right in his statement only time will tell, but in the meantime, work hard on your own game both in training and matches. Take the positives and work on the negatives in the continuous strive to Find Your Own Mojo.’