THERE has been a paradigm shift in the way we coach defenders in the last 15 years. If we think of the traditional corner-back, they usually had three pre-requisites.

1) Hard as nails, the type of player that took pleasure in taking lumps out of their team mates in training, particularly those who had a pony tail or white boots. 2) Speed demons, they always had that burst of pace to get out on front of a forward and deny them possession. 3) Absolutely no football ability, the relationship they had with kicking and soloing was similar to my relationship with a comb. They had one job and that was to win their battle and snuff out their opponent.

Let’s contrast that to the modern defender in today’s game. Firstly coaches rarely allocate time to coaching the art of individual defending anymore. They coach a defensive system that limits space for opposition forwards to operate in.

Think of your average supporter at a club game 15 years ago. If Joe was getting a roasting by a tricky corner-forward they would call for him to be hooked and to try Jim on him. Fast-forward to today and if the same scenario presented itself they would apportion zero blame to Joe but instead they would be asking the manager why is he being left one-on-one inside?

The game has changed to the extent that one-on-one battles are almost obsolete. The offensive mark has perhaps put the final nail in the coffin of the traditional corner-back. In previous eras, if a forward won a ball out in front of him he would hound him, push him out the field and not let him in on goal.

Now if the forward wins it and claims a mark, not only is it a free shot but the defender can’t even touch him and must retreat, thus killing off any lingering combative instinct.

Ironically the dying art of individual defending has contributed to the inside forward’s demise. In the above example, instead of winning the ball and skinning their man they raise their hand and have a free pop. Think of Peter Canavan, Mickey Linden or Colm ‘Gooch’ Cooper adopting this approach in their heyday.

Indeed, in today’s game these players would be moved out the field to get on the ball and at club level more and more forwards are being converted into half-backs. I have witnessed several examples where a key forward has been placed at centre half-back.

The modern coach wants defenders who can attack from deep and if they can defend it’s a bonus as opposed to a necessity. Much like the modern ’keeper, shot-stopping ability is a bonus rather than a requirement.

Thankfully, if we look to the big games this year there seems to be a trend towards players who can do both. Padraig O’Hora, Lee Keegan, Ronan McNamee and Conor Meyler can comfortably do both. I hope this trend continues as part of the joy in watching big games is seeing top players battle it out against each other.

The key to this, like most things, is coaching at grassroots level. When you coach a senior team you are working with players who have already been moulded. You can work on elements of their game and improve them to a certain degree. What you can’t do is turn back the clock and build it into them when they were young.

It does the heart good these days to see GAA clubs focusing on developing underage players. Pitches are regularly packed out with boys and girls as young as four and five.

Crucially the standard of coaching, due to the level of coaching education available, has never been higher. 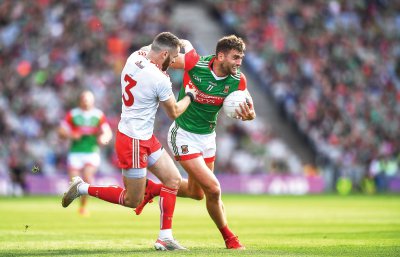