TYRONE’S success this season was built on solid performances in underage intercounty teams, and university football.

That is one of the assertions made in the most recent episode of Take Your Points which will be broadcast this weekend on NVTV.

Guests Gavin McGilly, the St Mary’s University Sigerson Cup manager, and Paul Devlin, the former Tyrone player and current u-20 Tyrone manager, are on the show to discuss the All-Ireland final between Tyrone and Mayo.

McGilly makes the point that Tyrone’s success has been directly impacted by the players on the team who came through St Mary’s, many of whom were part of the successful Sigerson Cup team of 2017.

Ten players on the current Tyrone team went to St Mary’s and McGilly said he can see a direct link.

Paul Devlin, who is the Tyrone u-20 manager, also believes that the work that has been done with Tyrone players at underage level through minor and the u-20s has helped them to get where they are today.

The third guest on the show is Cahal Carvill, Gaelic Life’s columnist. He suggests that the issue of how Mayo play Aidan O’Shea will have a big bearing on the game. He also reveals that tips from two sporting stars, one from Donegal, another from America, made him believe that the Red Hands can win tihs weekend.

Watch the show on NVTV this weekend (Freeview Channel 7, Virgin media Channel 159). And the show will also be posted online on NVTV.com and on Gaelic Life’s website.

Listen to the podcast on spotify, and in most good podcast providers. 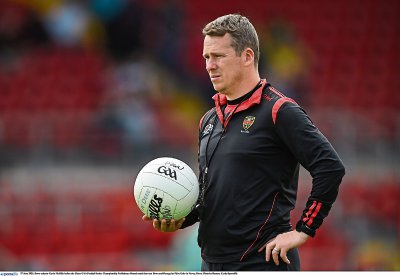 TYRONE U-20S…. Paul Devlin has worked with many of the current Tyrone team at underage level

5 January 2020; The Tyrone team in a pre match team huddle before the Bank of Ireland Dr McKenna Cup Round 2 match between Tyrone and Cavan at Healy Park in Omagh, Tyrone. Photo by Oliver McVeighSportsfile

5 January 2020; The Tyrone team in a pre match team huddle before the Bank of Ireland Dr McKenna Cup Round 2 match between Tyrone and Cavan at Healy Park in Omagh, Tyrone. Photo by Oliver McVeighSportsfile