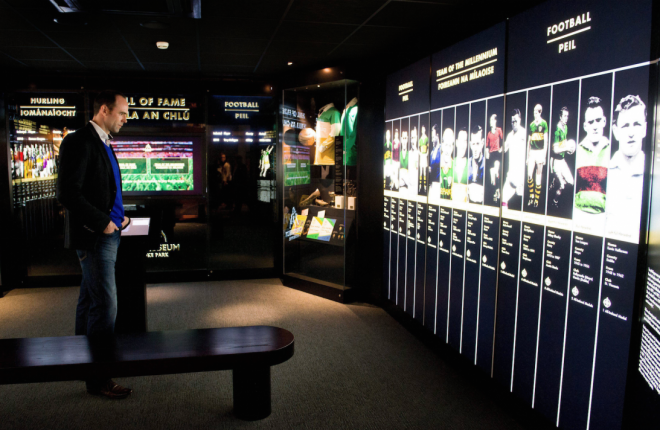 INNOVSTIVE…The GAA Museum has been running since 1998

AN exciting new exhibit is to open at the GAA Museum at Croke Park in the coming months.

A new interactive exhibit, which will see visitors immersed in the thrills and spills of the All-Ireland final, is set to add another dimension to the facility.

The 360-degree experience will give an incredible sense of what it’s like at Croke Park on matchday, using the 2016 football final between Dublin and Mayo as the template.

By wearing a VR headset the user will experience key moments of All Ireland Final day from the perspective of the player- running out on to the pitch to the roar of the crowd, parading behind the Artane Band and celebrating with the winning team.

Filming was completed by Big O Media with their purpose built 360 degree camera- comprising of 12 small individual cameras. The footage was stitched together afterwards to create three compelling one-minute film clips for museum visitors to enjoy.

It is just one of a number of projects planned by the museum for the forthcoming year, with the second annual summer school expected to be one of the most popular.

Running between June 29 and July 1, a series of papers will be presented on the topic ‘Sports and Politics in Ireland – The effect sport and politics have had on one another since sport was codified.’

It will look at things like the collapse of the GAA in the 1890s, Irish sportsmen of the First World War and the Hillsborough tragedy as cultural trauma.
comment@gaeliclife.com