TOM McGrattan was no doubt of the magnitude of Friday’s Mageean Cup win – it was the best feeling in the world.

“It is massive,” McGrattan said, as stood among a host of well-wishers.

“It is the first ever Mageean final and our second time every being in the competition.”

After winning the McGreevey Cup in their earlier years at the school, manager Darren Swail soon realised the talent as his disposal and moved them up the ranks.

Two years ago, Downpatrick were mixing it with St Mary’s Belfast in the Foresters Cup before Covid-19 pushed pause on school sport, until now.

An early win over Friday’s opponents Maghera in the group stages told them where they sat. But, to go the whole way – the scenes at The Dub on Friday night spoke volumes. The outpouring of emotion had to be witnessed to be fully appreciated.

But it so nearly didn’t happen. As they huddled up at the first water-break, Red High were 1-2 to 0-0 in arrears and lacked any inkling of composure.

McGrattan himself even went for goal from his first free when a point would have eased them into the biggest game of their careers.

However, it was his three points – including a monster from play – that helped cut Downpatrick’s deficit from six points to just two at half time.

Swail admitted his side had gotten out of jail.

It was McGrattan’s last two points that put an end to any chance of extra-time.

”If it wasn’t for everyone else winning the frees, then I wouldn’t have been able to hit them,” McGrattan added.

“I learned from it. I missed a few, I scored a few but it went my way tonight.”

There was no sign of panic. The huddle at the end of the first quarter was the epitome of calmness.

“It was just a case of setting down and keeping going,” McGrattan revealed. “(Before that) We were very nervous. We just had to keep shooting and getting the shooters on the ball.”

With time almost up, Maghera ace Peter McCullagh had a chance to level the game, but his shot tailed side before McGrattan’s insurance point.

“It was always going to be a battle,” the Downpatrick talisman admitted. ”They (Maghera) are a good team with a lot of good players.”

He was thankful of those further back in the Red High defence.

“Deaglan Mallon at full-back and Ryan O’Neill at centre-half, there was not going to be much ball going in there,” he said.

With Christmas approaching, it was the perfect present. The ‘Mageean Cup final 2021’ etched on this jersey and the glistening cup said it all.

“In first year, we always knew we were good enough,” a very composed McGrattan said. “The addition of Pearse Smyth, our goalkeeper, and Deaglan Mallon in Lower Sixth, it topped the team off and we knew we had a chance. Ever since first year we knew we could win it.

“The school will be bouncing when we get back. We couldn’t have done it without all the supporters and the managers. We are just a big family.” 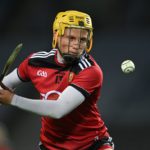 Down hold off Armagh fightback to earn early season win