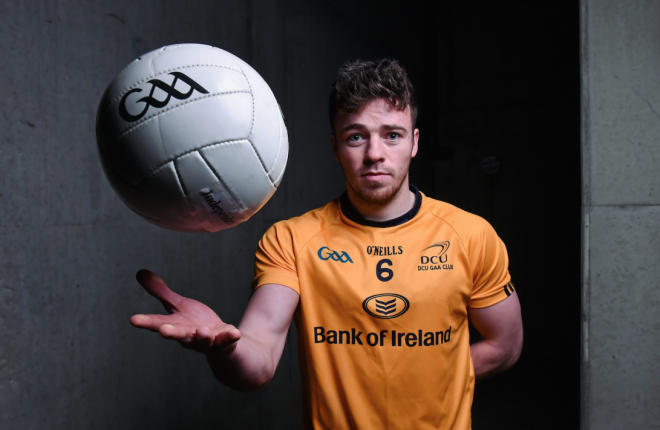 IT is Sigerson Cup finals’ weekend time again as the country’s best college teams fight out for the most coveted trophy in third-level football.

University College Dublin play University of Limerick in the first semi-final tomorrow but much of the attention will be on the second semi-final between hosts Ulster University and reigning champions Dublin City University.

Both teams have a vast array of inter-county talent and despite the age of much of the participants, are vastly experienced at all levels of elite football.

DCU’s Conor Moynagh is one of those stars. The Cavan footballer is the heartbeat of the Dublin outfit at centre-half back with his darting runs and quality foot-passing have helped him to stand out.

The 23-year-old is under no illusions as to the threat that UU bring. They will particularly have to watch out for Donegal’s Paddy McBrearty, who has lead the way for the Belfast side this year, including a 1-4 salvo in 10 minutes against Garda College in the opening round and an impressive sideline point en-route to a win over St Mary’s in the quarters.

“UUJ will be sore from last year’s loss and they will be looking to pay us back on Friday,” Moynagh said.

“We know Paddy is a brilliant player and he’s proved that for a couple of years at the top of the game.

“We will have to keep an eye on him but at the same time they have a lot of other great players as well. They have an All-Star forward line.”

DCU have been quietly impressive themselves so far. They were comprehensive winners over Athlone IT in the opening match before overcoming IT Carlow by seven points.

“IT Carlow gave us a good test last time out, which we really needed going into a tough weekend. The lads are looking forward to the challenge.”

Moynagh says that the standard of the Sigerson has been raised this year and DCU must continue to improve to retain the cup.

“UCD overtook us by a long way in the league. We hope that the new players that have been introduced will have learnt from their experiences in the league and the O’Byrne Cup. If you stay still at this level, you will be surpassed, so we must keep improving.”

The combination of the U-21 Championship, pre-season inter-county matches and the Sigerson has been criticised by plenty of pundits. Moynagh is one of the elite young players that has had to play a few games in a week in January and February, never mind train, all while travelling from Cavan to Dublin. He feels that there could be amendments made to the GAA calendar that would facilitate young players.

“There’s no doubt that January is hectic and it is a lot to take in. There have been quite a few proposals for change bandied about that are worth looking at.”

“You cannot change the Sigerson Cup so that it is before Christmas because teams are only getting together a few months earlier.

“The U-21 Championship is still useful and we would always encourage it. We had a really good four or five years at u-21 and that is helping a senior team at the minute.

“But maybe you could look at the structure of the League schedule. We have a break now to allow for the Sigerson finals but we could look at pushing the League forward. The gap between the League and the Championship could be addressed, leaving more time for other football at the start of the year.”

The Sports Science student is sure that both underage and college football have a big part to play in player development.

“Sigerson Cup is massive for player development. We’d a few players last year who were fringe players for county and ever since the Sigerson they have really come to the fore. It puts them in the shop window as such for inter-county.

“I enjoy the novelty of Sigerson. It only lasts for a couple of months. I get to play with the likes of Colm Begley, Davey Byrne and Micky Quinn, which I wouldn’t get to do otherwise. You learn from your team-mates and their backgrounds.”

Moynagh and his DCU team will be hoping to book at place in the Sigerson Cup final, live on TG4 on Saturday.

See this week’s Gaelic Life for full build up of the Sigerson weekend, available online here