THE Chinese Water Torture Cell: an illusion consisting of three parts. First, the magician’s feet are locked in stocks; next, he is suspended in mid-air from his ankles with a restraint brace; finally, he is lowered into a glass tank overflowing with water and the restraint is locked to the top of the cell.

Berlin, Germany, 1912. A young man by the name of Harry escapes the self-constructed clutches of death. A little wet, but all the while thoroughly alive. The audience descend into raptures of relief and delirium, their star is safe. Until the next stunt at least.

“No performer should attempt to bite off red-hot iron unless he has a good set of teeth.”

The concept of escape is more fascinating than that of winning, than that of glory. In the end, someone always wins. With this guarantee comes predictability, which allows us to mentally prepare. It focusses our minds.

Like Houdini himself, we are placed in a padlocked box that once upon a time we could think outside of. Unlike Houdini, we are not for moving.

Every so often, a performance like Monaghan’s on Sunday gone by highlights that word “nearly”. A score of 3-13 then put it in bold and underlined it. N.B, nota bene, mark well. For any driven sport’s team, the term “impossible” is as alien as the concept of a flat Earth. There is no edge, for as long as we keep walking, we will face more challenges, more obstacles, but all the while we will learn.

The 180 seconds or so that elapsed after Dean Rock’s penalty until full time produced everything we love about sport and more. Jack McCarron could probably bottle that feeling if he wanted to, but instead he decides to disperse it out annually in Clones like some supersonic boom, awaking us from a spring slumber and ringing in the summer all in one glorious swing of the left leg.

“’Glory Days’ rings out through sunny Clones. Monaghan supporters have never had it as good as the last decade. They’re what every small county in Ireland aspires to be”.

Derry man Cahair O’Kane, of Irish News Sport, stood basking in the glory of St Tiernach’s Park, gathering his thoughts, and tweeting a summation of the glory of the GAA in 29 words. In reality it could have been a thesis such were the events that had just unfolded beneath him from Clones’ sacramental press box, that on these rare sunny days doubles up as a sweat box. 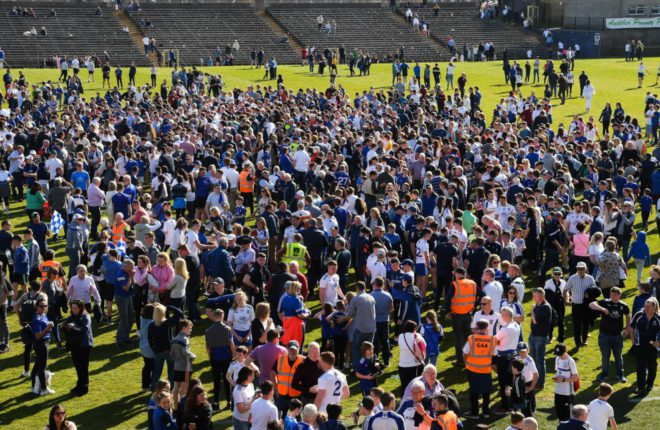 The sight of the pitch flooded with joy and spectators and joyous spectators reaffirmed his opinion. It confirmed that we are perhaps the luckiest county in Ireland. So often written off and yet here we stand with the second longest stint in the top division in the entire country. Many brilliant teams have come up for a vacation, but Monaghan have effectively taken up residence in what was supposed to be a holiday home.

The naysayers look on and cry of overreaction, but the pitch invasion post-match on Sunday highlighted the fact that this team encapsulates an entire county, and who else can say that?

The autographs were still being signed up to an hour after Noel Mooney drew a halt to proceedings. Hundreds of kids would have gone home with the name “Jack McCarron” decorating what now feels like their most prized possession. And their day too will come, some day they will instead be the ones holding the marker, and it’s all because of days like these.

It almost seems like every time this side have been written off, a victory is written in the stars. Perhaps it is that close knit sense of community that stands to us when backs are to the wall. Nearly every single one of the 60 odd thousand inhabitants of these drumlins were raised on this game. Some were pushed this direction; many were given a suggestive prod in the back.

It doesn’t take long for the message to sink in. Generation after generation will follow, until the end of time and beyond. Perhaps not what Elton John had in mind writing “Circle of Life”, but apt all the while. You stick by it, through thick and thin. That’s all it takes to be a member of this club.

This week, our little county dominated the GAA media nationwide. Our fellow countymen in New York, Brisbane, Vancouver, Dubai and any other little corner of the globe surely through tweets and articles and telephone calls would have got word of this magnificent occasion. A time to reflect, a time to think and say to yourself: “That’s where I’m from. That’s the place I call home. And by God am I proud of it”.

And so, the curtain has come down on another successful league campaign for Monaghan. Houdini survives his latest stunt. Against all odds. Again. Some day it might be straight forward, some day it might be drama free and easy. But that would be rather boring.

So, tie us down, lock us up, throw away the key. Just when you have assured yourself that this is to be the end, that the writing is on the wall, we will kick into gear and pull off The Great Escape.

READ MORE – Derry must kick on it they are to fine the next level. Click here…