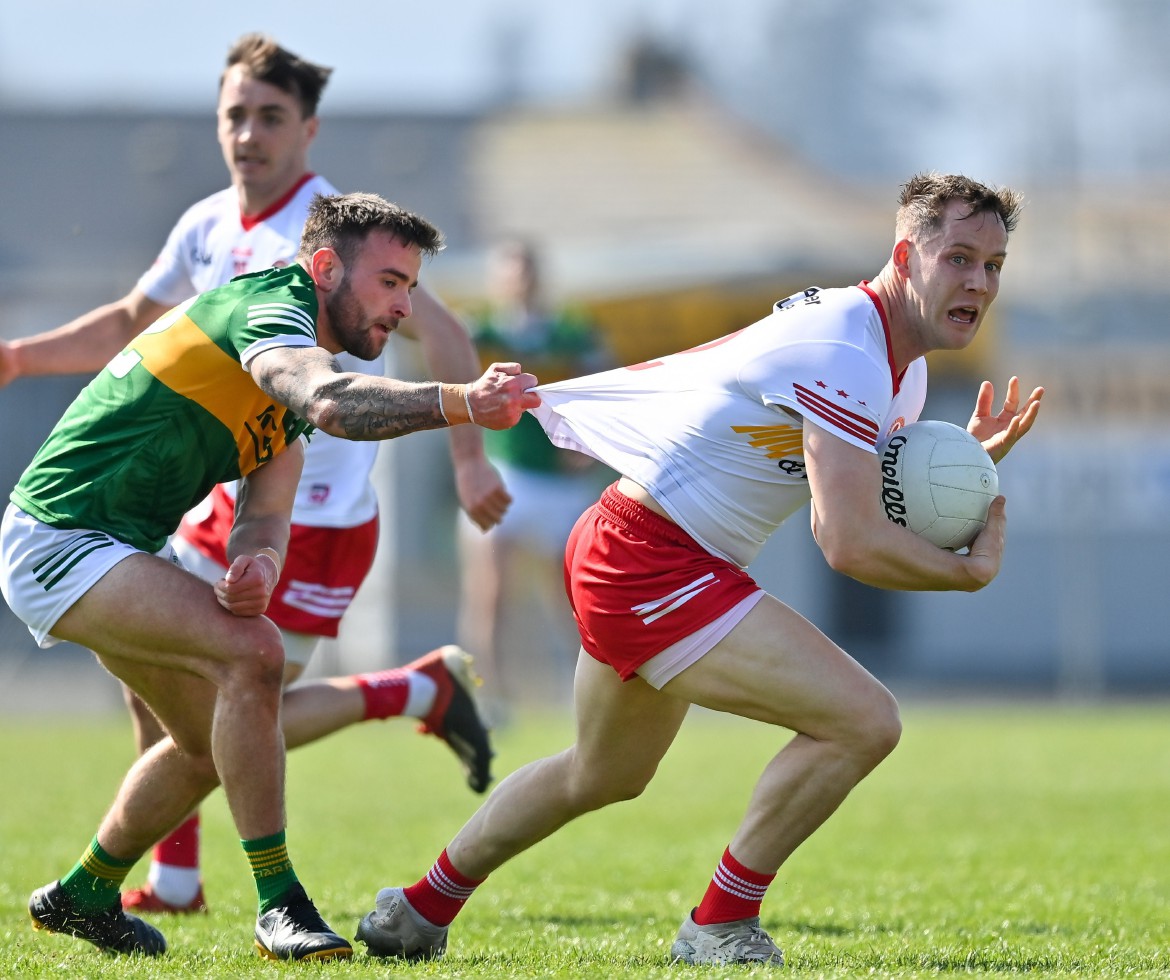 GET BACK HERE...Tyrone got the better of Kerry in an impressive display in Killarney

AFTER Sunday, Kerry have been installed as favourites to win Sam, but I am not so sure. I was ridiculed in 2013 for saying the Kerry production line had dried up. Since then, they have won one All-Ireland, in 2014, a fortunate one. Kieran Donaghy rose above the jitters to score the winning goal. Almost a decade on and they are no closer to winning Sam. In 2019, they were two up against 14-man Dublin with five minutes to go and couldn’t drive on. Last year, when it mattered, they wilted against Tyrone in the semi-final. As they showed that day, they are close to a one-man team.

Only David Clifford took the fight to the northern anarchists, putting on one of the greatest ever Croke Park performances in a losing cause. When he got injured from a hospital pass that was that. Tyrone were too serious. Too defiant. Too together. As my brother Proinsias (the air guitar expert) is fond of remarking, “Football in Tyrone is an expression of who they are. That is why they can beat anybody.”

As Kieran McGeary said before last year’s final when he was asked what motivated the group, “You don’t need motivation when you are playing for Tyrone.”

Mayo on the other hand, are not sure who they are or what they stand for. Is playing for them a commercial opportunity? Is it for the good of Mayo? Is there a greater cause? Is glorious failure enough? Are All-Stars and Player of the Year Awards on the mantelpiece sufficient?

‘Winning Time, The Rise of the Lakers Dynasty’, airing on Sky Atlantic, charts how a franchise that had become used to losing became winners. Jerry West, the legendary Los Angeles Laker from the ’60s, played in six NBA finals series against the Boston Celtics and lost them all. In the last of those, 1969, he was awarded finals MVP. His autobiography, ‘West on West, My Charmed Tormented Life’, documents how those serial losses wrapped him in a shroud for the rest of his life.

In the TV series, as Lakers head coach (briefly) he is shown going into a terrible rage in his office and smashing his MVP trophy off the walls. As the gold basketball breaks off and rolls along his office floor, he mutters “I’m a f**king loser.” When the extravagant physicist turned entrepreneur Dr Jerry Buss bought the Lakers and Magic Johnson (he picked 19-year-old Magic up at the airport and brought him straight to an orgy at the playboy mansion), West walked straight into Buss’s office and resigned as Head Coach. “I’m a loser. I can’t coach this team. Get someone who can.”

Larry Bird (described by Magic as “the greatest basketballer that ever lived”) said once “I never learned anything by losing.” The usual line is that you learn more from losing. If that were true, Mayo would have won several All-Irelands by now. Perhaps the truth is that losing conditions you to lose. Perhaps losing becomes a habit (like winning) and the longer the losing streak, the more that essential spirit of defiance is eroded. Perhaps losing becomes comfortable and unsurprising. I cannot speak from experience, as I was fortunate to play on winning teams at club and county level.

Like Jerry West, this shroud of losers hangs around Mayo and it was clear long ago that this group is doomed. I said to Kieran McGeary at a MND night in Cargin a few months ago, you must have been delighted when you knew you’d be playing Mayo in the final. He smiled, and said “No comment.” Like Jerry’s Lakers, Mayo have provided great entertainment. Every game is an event. They have played in at least three of the greatest All-Ireland finals and replays ever seen, never mind some of the greatest semi-finals. In this year’s league they have again been very exciting.

But very exciting is as good as it is going to get for them. Perhaps Mayo’s services to Gaelic football are a good enough legacy for some of them. I doubt if it is enough to sustain Lee Keegan or David Clarke or Colm Boyle. Passengers must be culled, as without trust, a winning team cannot be built, but this has never happened. Bird again “Leadership is getting players to believe in you. If you tell a teammate you’re ready to play as tough as you’re able to, you’d better go out there and do it. Players will see right through a phony. And they can tell when you’re not giving it all you’ve got.”

James Horan had tough choices to make but he never made them. He is complicit in the creation of this decade of failure. 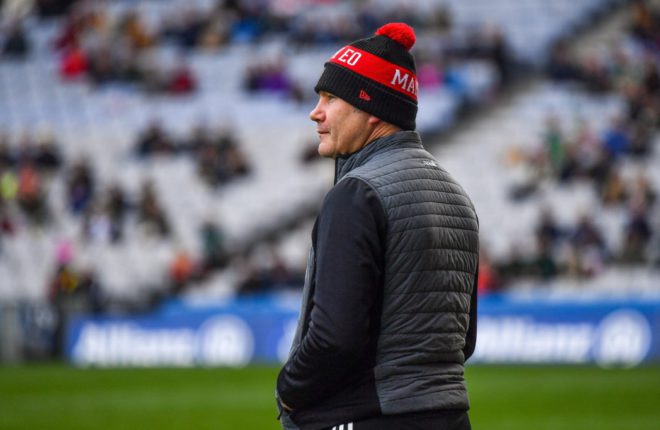 BOSS…Joe Brolly feels Mayo manager James Horgan is complicit in the creation of this decade of failure.

Winning teams are serious. They make decisive contributions when it matters most. Tyrone’s goals in last year’s semi-final and final. Dublin in every one of their All-Ireland years. Think of the 2016 replay. Mayo were two up. Connolly had been destroyed by Keegan up until that moment (Keegan had actually scored a goal). It didn’t matter. Diarmuid drove the penalty firmly to the corner of the net. The Dubs won by a single point. This is what winners do.

Again, in the 2018 final, Dublin were three behind. Penalty. Mannion was delayed by the Tyrone bucks for three minutes but didn’t let it bother him and calmly drove it to the net. Connolly was asked about that penalty afterwards. He said “We weren’t here to defend Sam Maguire. We were here to attack the game and win it. When I take a penalty I just take a breath, put it in the corner, put it away. That’s all it is.” Creating opportunities and missing them is not an excuse. It is a structural defect.

In 2020, Jim Gavin, referring to the five in-a-row drawn game, said “the team will fall to the level of preparation and training I have put into them. All-Ireland final, a point down, a man down, five in-a-row on the line. How well they perform is how well they have trained. You can make tactical adjustments on the sideline, but in reality you have very little influence. It’s up to the players.”

The manager establishes the culture. He must ruthlessly make decisions based on the good of the team. Diarmuid Connolly, for example, was gone by 2018 and returned a year later, as a bit player who was barely used. In most other counties he would have played until he retired. Kerry don’t look much different than last year to me. They solo run too much. They are heavily reliant on Clifford. They had it all their own way against a really badly organised Mayo team (the last time Clifford was left one v one was in the 2017 minor final against us and he scored 4-4) which is just the way they like it. A week earlier, the Independent Peoples Republic of Tyrone sent their boys down to Kerry and they were too tough and too serious for them.

Glory is great. Winning is closure. My great friend Fergal McCusker summed it up when his club Glen finally won the Derry Senior title in 2021 after 89 years. 89 long years when they were ridiculed as “losers” ( one well known coach labelled them “ the yellowest team I’ve ever seen”) and “chokers”. Out on the pitch, holding his young boy in his arms, beaming, Fergal was asked what this meant. He told the BBC “It means I can go into any bar or club house in Ireland and hold my head up high. It means self respect. No one can ever call us losers again.”

Pat Riley took over as Lakers Head Coach in 1981 and established a ruthless, winning culture. They went on to win five championships. Jerry West still lives with his nightmares. Tyrone will not have to live with theirs.