By Michael McMullan
at Croke Park

GLEN’S wait for an historic first All-Ireland title must go on after their season of dreams were shattered at the hands of Kilmacud Crokes on Sunday.

Trailing by two points, Eunan Mulholland’s high ball as flicked on by Emmett Bradley, but Conor Glass saw his snapshot turned around the post by Crokes’ ‘keeper Conor Ferris.

There was still time when the 45 dropped in, only for Conleth McGuckian’s shot to blaze wide with the last action.

The Dublin side had 16 players in the field for the last play, but Malachy O’Rourke didn’t entertain any chat of appealing the game in his post match interview, saying his side had the chances to win the game ocer the 60 minutes.

Glen were 1-3 to 0-1 ahead early on with Danny Tallon bagging a goal in the first minute before Alex Doherty and Emmett Bradley added points for the rampant Ulster champions.

Kilmacud, who started with Paul Mannion as one of two late changes, got back into the game with a Shane Walsh penalty after a foul on Shane Cunningham.

The Crokes were ahead, 1-4 to 1-3, at the break and could’ve had the dream start to the second half when Andrew McGowan made a chance for Aidan Jones only for goalkeeper Connlan Bradley to make the save with Walsh – who didn’t score from play – slotted over the 45.

The game ebbed and flowed in the second half with Conor Ferris making a save to deny substitute Stevie O’Hara.

The sides were level with 10 minutes to go before the Crokes went into a two point lead after a Tiernan Flanagan pass was intercepted as Glen pressed and probed for an equaliser.

There was still time for Glen to create the late chance and Conor Ferris made the breath-taking save. It was instinctive and  was redemption for after giving the ball away in the dying embers of last year’s final in the lead-up to Jerome Johnson’s winning goal for Kilcoo. 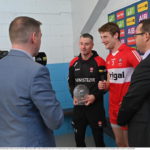 Glen can go all the way says Brendan Rogers 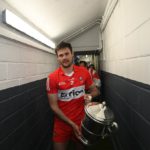 A season to remember for the Oakleafers