ANTRIM’s Cathy Carey has been honoured with The Croke Park/LGFA Player of the Month award for August 2022.

Carey scored 2-1, including a goal in each half (the first a penalty), in a player of the match performance, as Antrim claimed a first TG4 All-Ireland Junior title in ten years.

Beaten finalists in 2021, Antrim went one step further this year and Carey also had the honour of lifting the silverware as team captain.

Cathy had also performed well in the drawn Final at Croke Park on July 31, scoring 0-2 as Antrim and Fermanagh drew 0-13 apiece.

But individual and team performances went up a notch in the replay, as Antrim stormed to a comfortable 3-15 to 0-11 victory in sweltering conditions.

Victory for Antrim ensured a third TG4 All-Ireland Junior medal for the vastly-experienced Carey, who was also a key member of the winning set-ups in 2009 and 2012.

Cathy was presented with her award today by Edele O’Reilly, Sales and Marketing Manager, The Croke Park.Ends 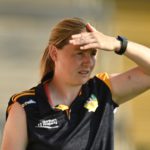 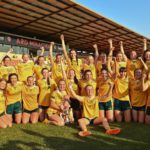