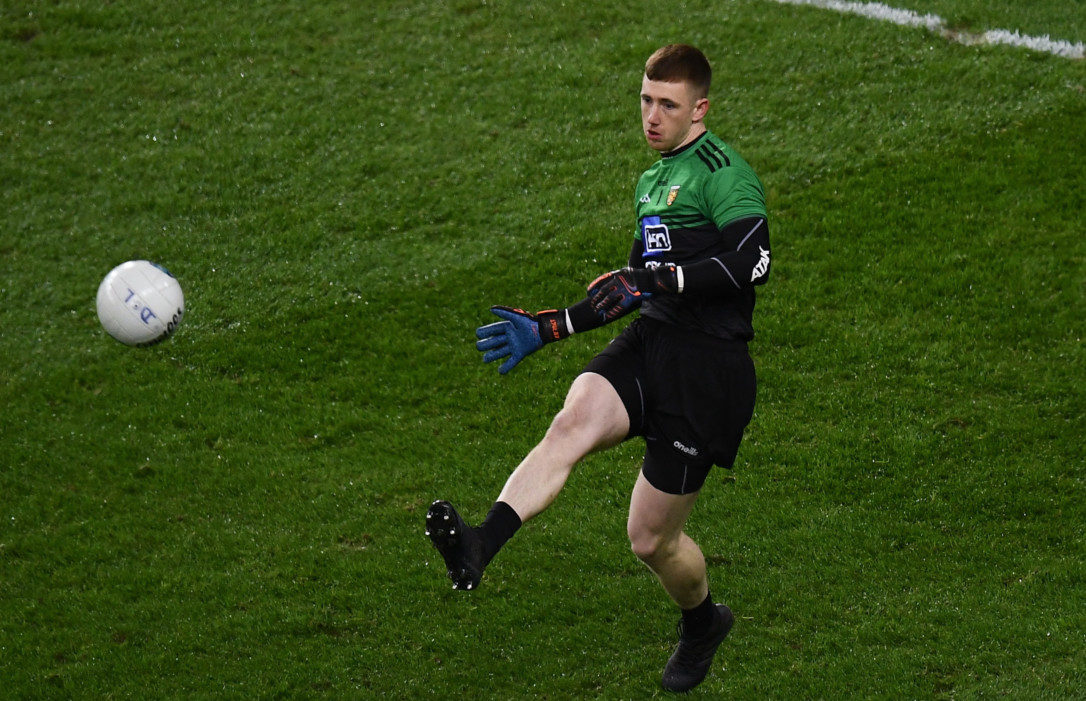 POINTING OUT...Restarts are a vital component of the modern game

IN the modern game of Gaelic football, we are under no illusions about the sudden rise in focus on restarts.

This rise has also coincided with the rise in importance of the Goalkeeping position as a whole. What the goalkeeper can offer to their team has grown exponentially over the past 25 years.

The position has evolved from being the last line of defence into also being the accustomed sweeper in front of the full back line (Shaun Patton, Donegal), free taker (Rory Beggan, Monaghan), chief organiser (Shane Ryan, Kerry) as well as now being the first line of attack and in some cases actually joining the attack (Ethan Rafferty).

Nowadays the area of a goalkeeper’s repertoire that is place under the microscope the most is their restarts. All goalkeepers are scrutinised in this area, and none escape feedback from the analytical personnel both pre- and post-game. For a goalkeeper, in today’s game there is absolutely no hiding place in terms of video evidence and statistical analysis on how well a team’s restarts were performed or whether the agreed targets had been achieved.

The goalkeeper does have one major saving grace. Restarts are a team thing and do not solely depend upon the actions of the goalkeeper alone. I have explained in previous articles, and coached to any team that I have taken restart clinics with, that the Restart has three components and they are the three R’s (Routines, Receivers, Restarter). In previous articles I have focused on both the Routines and the Restarter in depth and this week is the turn of the Receivers, those players who are receiving the ball.

By changing the name from kickout to restart we change the understanding of what we are trying to achieve. Restart implies that we have possession of the football more than the word ‘kickout’, as well as focusing the mindset of the receiving players that they have a role to play. ‘kick-out’ suggests that the ball will just be ‘kicked out’ back into play for teams to fight for possession. It is because of this change in jargon that we understand that the Receivers are the ones who initiate the restart with their movement and not the goalkeeper (restarter).

If the receivers do not move or their movement is not frequent of the required standard, the restart then runs the risk of fast becoming a ‘kickout’ again whereby the restarter (GK) will look for the numerical advantage for their team and place the ball accordingly. This is not to say that kick-outs cannot be contested successfully but by creating a restart it significantly increases the success rate in terms of regaining possession of the football, which in today’s possession-based game has become vitally important.

With the movement of the receivers paramount to the restart and the restart  initiated by this movement, it is important for those outfield players wanting to receive the ball to learn how to create better quality of movement for the goalkeeper. This will need to be practiced religiously by teams,, especially when devoting all or portions of a session to working on improving restarts. But the most important point to remember is:

Simply put, if a receiver is moving or actively looking for the ball on a restart they are ‘making space’ both for themselves and the other receivers around them. By constantly moving it allows the receiver to move into space in different areas and different directions of the pitch while also creating space for other receivers by leaving space each time they move from one area to another. If, on the other hand, a receiver does not move or only moves to one area to another and then stops, this means they are ‘taking space’ both from themselves and the other receivers.

By not actively looking for the ball or restricting the quantity of movements, the receiver is taking away the space for themselves to receive the ball. As well as this, if they do not move from area to area then it reduces the number of space/areas that the other receivers can operate within. This also allows the opposition to close of the remaining spaces more easily, turning the restart back into a kickout.

It is important for the goalkeeper to both praise and challenge those receivers who are either making space or taking space respectively. If the receiver’s movement is not good, it places more pressure on the goalkeeper’s kicking ability and also decreases the margins for error, making mistakes more likely. By not addressing these issues the goalkeeper is placing much more unnecessary pressure on themselves than is already present in a restart situation.

Another point that is important for the receivers to note is to be mindful of the natural boundaries of the playing field. For example, receivers may think they are running into space as they run towards the sideline but in actual fact they are running out of space as the gap between them and the sideline becomes smaller and smaller. In essence it is this gap that the goalkeeper has to aim at and if it is decreasing in size, it will mean that the level of accuracy and the amount of pressure on the goalkeeper’s kick will vastly increase. In this scenario the best option for the receiver is to change their direction and look for the next space.

Receivers need to practice their movements for restarts, especially those first initial movements that are designed to create separation between them and their opponents. Working on their speed, agility and quickness by incorporating various SAQ training into their personal routines can help. They may also look to other sports where gaining separation from  opposition players is vital – e.g. rugby, American football, soccer etc. All use various evasion techniques that are transferable to Gaelic football.

For the goalkeeper, they must remember that there are two types of kick for them in any restart scenario. The first is kicking the ball from ‘face to space’ and this is where the goalkeeper places the ball into an open area of space where the receiver can go and collect the ball, usually within one bounce or less. The second type of kick is the ‘face to face’ kick whereby the receiver has less time and space to work with, meaning the goalkeeper aims to place the ball straight to the receiver without it bouncing at all, a much more difficult kick to master but can be mastered nonetheless.

Routines, receivers, restarter. Three components of the restart and all of which have different subsections in regard to the roles that they play. Routines are the most important aspect and need rehearsed religiously during a season. Restarter is the final part of the restart and is responsible only for the kick (face to face or face to space). And Receivers, begin the restart with their movement and the important point for them to remember is: “If you’re not Making Space, you’re Taking Space.”