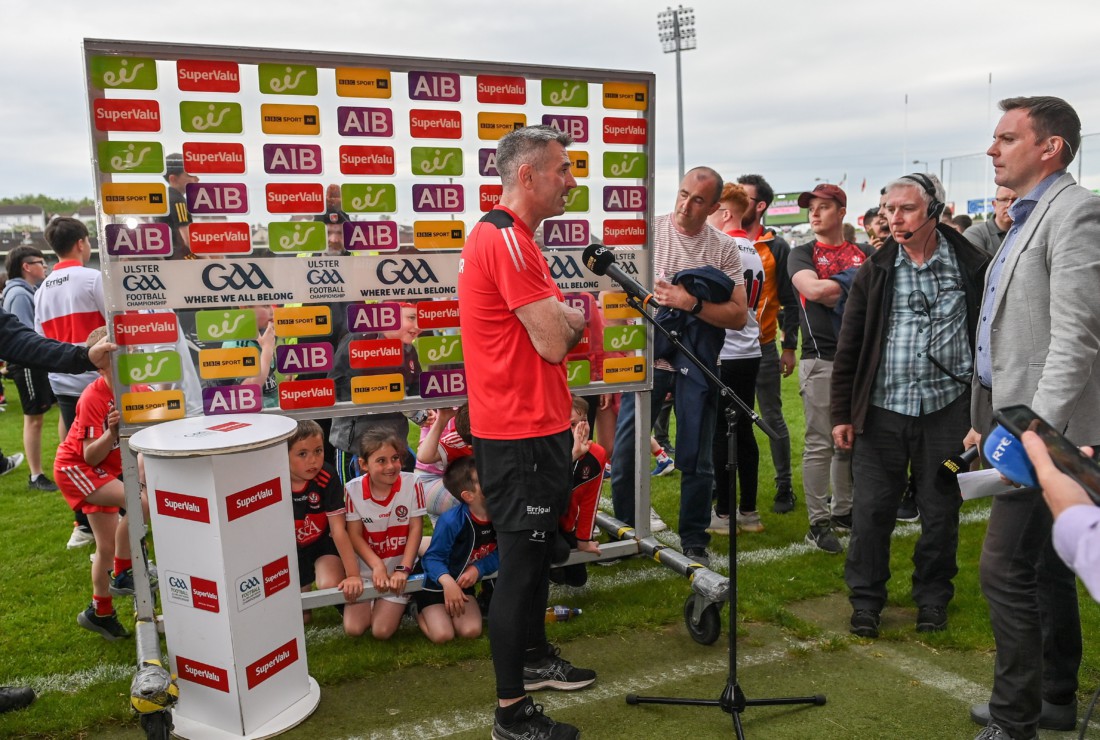 THE BEEB...Joe Brolly believes the GAA’s new broadcasting deal with the BBC will vastly improve the overall coverage

MARADONA would have been 60 this week. The greatest left foot in the history of the world.

To commemorate his birthday, The Funny Old Game soccer site broadcast a goal he scored for Napoli against Verona in 1985. The Verona ‘keeper launches a high kick out from his hands, in the manner of a Cavan defender from the ‘40s. It is headed back out of the Napoli half by a defender; a high, looping header towards Maradona who is loitering 35 metres out near the sideline.

As it drops to him, he has his back to goal, touches it lightly with his left foot to cushion it, letting it to bounce just high enough to give him time to turn and face the goal. As it comes down, he launches a shot off the outside of his left foot. The keeper is only a few yards off his line, but with Maradona, a few yards is an acre. The ball sails over his head into the top corner as the ‘keeper grapples with the netting. The commentator roars, “Maradona, Maradona, an astonishing goal, even by his standards.”

The crowd has gone insane, exultant, way beyond normal celebrations. There is a wildness about them that was only reserved for Maradona. Something about the little man made us forget our shitty lives for a moment. Made us shake our heads in wonder. Something about him meant we felt part of it, as though he was one of us. I have watched the goal 50 times and every time I do I get goosepimples. There is only Maradona. The rest are neither here nor there. A constant reminder of Danny Blanchflower’s immortal line that the game, any game, is first and foremost about glory.

When I was a child, we could watch Maradona on the BBC, but we couldn’t watch the Bomber Liston or Frank McGuigan. The Beeb did not really mention Gaelic games, unless there was bother. The unionist community viewed the GAA with suspicion and hatred. The DUP described us as “The IRA at play.” If we could get the signal, we watched the games on grainy RTE pictures or listened to them on the wireless. The comedian Paddy Kielty once said that having heard Michael O’Hehir and Mícheál Ó Muircheartaigh on the wireless describing so and so as “a ball of fire” or “a giant” it was a terrible anti-climax when he finally went to Croke Park and discovered they were only human.

The story that has passed into Northern folklore was that it was Jackie Fullerton, the doyen of Northern Ireland sports broadcasters – a man whose hair would put Ron Burgundy to shame – who opened the new era in community relations. For the first time, the National League results were read out on the BBC. When he came to the hurling results, Jackie said “Down 3-13 Antrim 2-17 (pause) So well done to whoever won that one….” No one was insulted. Jackie was and is a legend in the North, wherever he goes. The ice was broken. In 1989, with the arrival of Jim Neilly as Head of Sport, things began to change. A few years later, the Beeb finally broadcast a live Ulster Championship match, introducing viewers after the national anthem had been played.

The five-year broadcasting deal announced this week is a metaphor for the transformation in Northern society over the last quarter of a century. Scarcely believable for the older generation; No big deal for the peace babies. From next year on, BBC2 NI will show eight Ulster Championship games live. The channel will also live broadcast the All-Ireland semi-finals and finals in both codes. They will also show either the football final or hurling final live on its BBC2 UK wide channel, opening us up to a potential audience of over 70 million people. There will also be 10 National League games live streamed on the BBC UK iPlayer. Plus highlights packages of 30 club games across Ulster leading into the Ulster Club Championships and on into the All-Ireland series on the BBC Sport website. Make no mistake, this is massive for our games and for our community.

Brace yourselves: In the first three months of 2022, the BBC iPlayer, which will stream 10 National League games a year, had 1.83 billion streams. They are currently at around 7.2 billion streams annually. It is a vast, slick service that dwarfs anything we have been accustomed to. Between July and August this year, the BBC Sport website (which will be used by the BBC for GAA highlights packages) had 621 million visits. Annually, the website is at around 3.5 billion visits.

Then, there is the BBC Sport Twitter account, which will be used for GAA clips. It has 10.5m followers. Let us say that four or five highlights per game are tweeted. These automatically go to 10.5m people. Imagine what will happen when Gary Lineker (8.6m followers) or Dara Ó Briain (2.6m followers) or GAA fanatic Niall Horan (41m followers) start retweeting?

At the heart of this extraordinary new era in GAA broadcasting is a rugby fanatic, 47 year old Bangor Grammar alumnus Neil Brittain.

Formerly the IFA’s Director of Communications & Strategy, then the Ulster Rugby Union Director of Communications, he started out as a cub reporter in UTV and is now the BBC’s Head of Sport. Like all of the best people in the sports industry, he glows with boyish enthusiasm for sport and its stars. At heart, he is a fan, an admirer. His vision, from the moment he became Head of Sport, was to secure this unlikely deal.

I met him at the time and came away sceptical but interested, as I could see the effect he had on people around him: an irresistible feeling that things were going to work out well. He has worked his magic. One minute, lurking around outside the dressing rooms at Windsor Park and the Brandywell on freezing Saturdays looking for a quote from the star striker. The next, sitting at the All-Stars banquet with the president of the GAA asking him to pass the salt. The thing about Neil is that you don’t see him coming. He just somehow materialises. Then, he deflects all of the credit. In future I shall refer to him as Great Brittain.

With the BBC, we are in great hands. Their live shows are excellent. With the spiky Mark Sidebottom as anchor, the conversation is allowed to take unpredictable and entertaining directions. Like all retired hurling goalkeepers from the Glens, he has a stubborn, proud streak that means he is always up for the battle. A few years ago, when he was my club St Brigid’s keeper, a Lamh Dhearg supporter took up position behind the goals where Mark was stationed, lambasting the BBC and Mark.

After a bit, Sidebottom could take no more, set down his hurl and angrily invited him over the wire, at which point the man gamely retreated. The BBC have a lot of advantages. No ads. Conversation allowed to flow. Massive audience reach. Sadly, there will be no competition time, so viewers will not be able to ponder whether Dublin, Dubai or Dubrovnik are the six in-a-row football champions. But on the plus side, the audience figures will dwarf anything the GAA has ever seen.

The Beeb also has the superb ‘GAA Social’ which has audience figures in the hundreds of thousands. It is hosted by Tommy Niblock. Like Jerry Maguire, everybody loves Tommy, and his podcast is GAA gold. Why wouldn’t it be? After all, he comes from Derry Gaelic football royalty. His cousins Mickey and Hugh Niblock starred for O’Donovan Rossa, Derry and Ulster, his da Frankie for Rossa. They all won Derry senior championship medals in 1978. Mickey went on to win two All-Ireland club medals with Nemo Rangers. Oh, and he also played soccer for New York Cosmos, turning out with German world cup winner Franz Beckenbauer. The Cosmos signed Mickey as the replacement striker for a chap you may have heard of: Edson Arantes do Nascimento, aka Pele.

It was a source of great dismay a decade ago when the GAA did the deal with Sky that took our games away from the people. It was wrong then and it would always have been wrong. This week, that terrible wrong has been righted. It was a brilliant feeling to see the three heads of sport, Rónán Ó Coistealbha (TG4), Declan McBennett (RTE) and Neil Brittain (BBC) together after the deal was announced. Three free to air channels will be our ambassadors going forward.

It is an outstanding deal in every way. It ensures that for the next five years, the games will once again belong to the people, not Rupert Murdoch. And unlike Sky, with the BBC on board, the sky truly is the limit. 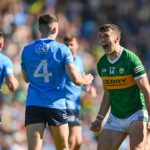 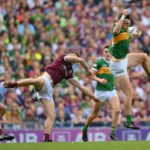 JOE BROLLY: The problem with pulling the brakes