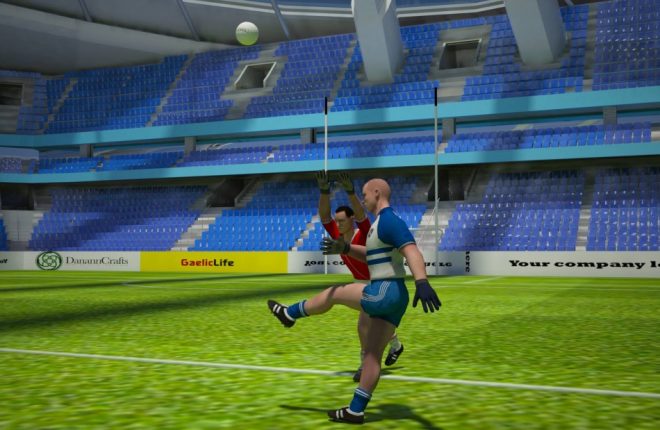 An early screenshot of in-development videogame ‘All Star Gaelic Football’

THE designer of a Gaelic Football computer game says that investment is vital to bring the game into the next stage of production.

‘All Star Gaelic Football’ had been mooted for a Christmas release this year but that has been put on hold due to a lack of funds, according to Mojopin Studios CEO Peadar McMahon.

At present, the game is PC-only but McMahon is hoping to bring it to a multi-platform market.

He said: “It’s not going to be out for Christmas, you get so far and you go down certain avenues and those avenues get closed off and you have to take a different direction.

“At the minute we’re just in a fundraising and awareness stage. We’ve got a couple of leads but we’ve had this before and sometimes it fizzles out, but our main avenue at the moment is looking promising.”

“The intention is to go multi-platform but I can only officially say it’ll be on the PC. I’ve been in discussion with both Xbox and Playstation.

“Xbox is more open to talking but you need to get it to a certain stage and then they take it from there. It should be fairly straightforward as long as they can see a quality game is being made. I’ve had contacts with them but it’ll be more down the line.”

The intention is to have licenced player-names, likenesses and stadiums albeit McMahon admits he hasn’t been helped by a less-than-productive meeting at Croke Park.

“I met with the GAA in January, let’s just say it wasn’t the most constructive meeting. I met with three guys, a GPA guy and a marketing manager as well as another official. The first two were behind it but the other official doesn’t seem to understand it,

“He was saying various things like ‘we can’t put investment into this when we need to put a million pounds into Parnell Park, that’s what our members would prefer.’

“I thought one, I’m not asking for investment, and two, I think you’re quite out of touch with what your members want. I don’t think people in Tyrone and Armagh care whether Parnell Park is developed.”

Nevertheless McMahon is confident that the game will eventually hit the shops and he says that within the next month he’ll have something more to show for his efforts.

“It’ll be finished, I’ve put enough money into it that I’d prefer to have something out there. I’m not going to make something if it’s not right so if it gets out there it’s going to be good.

“The thing we really need is promotion geared towards the people who have the dough and the expertise in certain areas. I’m going to do some streaming and showing off what we’ve been doing in the past while in the next month. I’ll be putting up some youtube videos or streaming on twitch, it’ll be small but we need to keep the audience active.”