DUNLOY’S wait for an elusive first All-Ireland title must go on after a fifth final disappointment at the hands of Ballyhale Shamrocks on Sunday.

It was a late rally of points that sealed the Shamrocks’ ninth title to make up for last year’s last defeat by Ballygunner and Harry Ruddle’s late, late goal.

Ballyhale started without the injured Adrian Mullen, but Joey Cuddihy opened the scoring before Dunloy hit the net.

It was Keelan Molloy’s diagonal ball to Conal Cunning and Ronan Molloy came on the run before burying below goalkeeper Dean mason in the third minute. Points from Colin Fennelly and TJ Reid, from the wing, soon had the sides level.

Oran Quinn got forward for a fine score midway through the half before Ballyhale had the ball in the net. It was made by Colin Fennelly who sucked defenders to him, leaving Eoin Cody the chance to make it 1-4 to 1-2.

Dunloy won the puck out and were back level with points from Conal Cunning (free) and Nicky McKeague.

Ryan Elliott made two further saves before Ballyhale pushed into a 1-9 to 1-5 lead with scores from Eoin Cody (2) and Evan Shefflin.

Gregory O’Kane’s men finished the half with a flourish. Seaan Elliott hit a nice point from play before Conal Cunning narrowed the gap to two at the break.

Ballyhale hit two points early in the second half from TJ Reid and Eoin Kenneally as the rain began to drizzled down.

Kevin Molloy, operating as sweeper, sat deeper and cut out the first two balls into Fennelly but Dunloy failed to translate them into an openings.

It took a fine Eamon Smyth score to get them back on track, but it was the Shamrocks who held a 1-11 to 1-9 lead after 37 minutes.

A Molloy run drew and free an Cunning’s sixth free had the bare minimum between the teams.

A seventh Reid point was cancelled out by a fine effort from Ronan Molloy and Dunloy were within a point, 1-14 to 1-13, with eight minutes to go.

Eoin Cody then took his tally to 1-4 with a score from the wing and Ballyhale were still able to keep their noses in front.

Points from Paddy Mullen and Killian Corcoran opened a 1-17 to 1-13 lead with five minutes to go as Dunloy sprung Chrissy McMahon from the bench.

Cunning and Shiels hit late points, but there was no stopping Ballyhale from taking the  title. 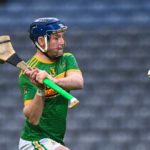 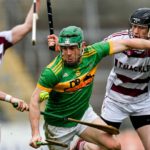 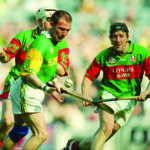