Arriving at her home ground on a helicopter straight from her wedding reception, McConnell delivered the goods to ensure the Monaghan side overcame the challenge of their Dublin and Leinster counterparts.

Full-forward Lauren Garland also chipped in with 1-2 over the course of the action as Donaghmoyne booked their spot alongside defending champions Kilkerrin-Clonberne in what will be a repeat of last year’s semi-final, this time at Croke Park.

In an even start to the contest, Crokes points from Kate Murray and Michelle Davoren were cancelled out by Garland and Cathriona McConnell. Ulster champions Donaghmoyne were playing with the aid of a strong breeze in the opening period, however, and took control of the contest as it progressed.

Following a brace of successful Cathriona McConnell frees, Garland added a 1-1 salvo – her goal a superb finish to the top left-hand corner on 18 minutes. The dependable Cathriona McConnell increased their lead to seven, moments later, before Crokes finally responded with much-needed points from Julia Buckley and Éabha Rutledge.

Yet Donaghmoyne remained in the driving seat with a Sandra McConnell score helping them to establish a 1-7 to 0-4 interval cushion.

Rutledge did narrow the gap on the resumption with her second point, but their Farney rivals continued to play with confidence. After midfielder Cora Courtney added her name to the scoresheet, Cathriona McConnell once again found the range off her trusty left boot.

Crokes were lining out minus the services of the influential Lauren Magee, but were able to introduce Cork’s Niamh Cotter and Ireland hockey international Deirdre Duke off the bench. Although a Rutledge free kept them in touching distance heading towards the final-quarter, the sin-binning of Mia Jennings in the 49th-minute left them hamstrung at a pivotal stage in the play.

In her absence, Cathriona McConnell contributed another two points to move Donaghmoyne a step closer to another showpiece appearance. Cotter did force a fine save out of opposition goalkeeper Linda Martin after Rutledge had increased her personal haul to 0-4, but Kilmacud came up short in the end. 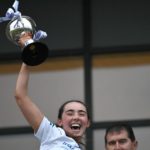 Monaghan got the extra mile to land minor All-Ireland title