THREE second half goals shot Derry to a 12th McKenna Cup after a rampant performance on Saturday night.

The Oaks had the wind at their back and led 0-7 to 0-1 before Tyrone pulled themselves back into the game thanks to a Darren McCurry goal.

Rory Gallagher’s side came with another burst to secure a deserved win and a boost ahead of next week’s NFL opener at home to Limerick.

Derry had the breeze at their back and made the most of the opening half with the in-form Niall Toner opening the scoring with hint of a goal had it taken it on.

Liam Nugent hit Tyrone’s only score of the half before Derry kicked on. Lachlan Murray kicked a fine score from the wing before Toner (2) and McGuigan hit frees to give Derry a 0-5 to 0-1 lead.

Benny Gallen made fine saves to deny McGuigan and Murray, but Paul Cassidy pulling wide with the rebound from the latter.

Oisin McWilliams and Murray added Derry points before the break before Tyrone hit the ground running.

Cathal McShane and Conor Meyler came in the break, with Niall Devlin and McShane hitting early points to but the gap to 0-7 to 0-3.

Tyrone hemmed Derry on their kick-out and when McKernan passed to McCurry he slotted to the net in the 45th minute, 0-7 to 1-3.

Morgan drilled over a 45 minutes later to level the game for the first time since the 11th minute.

Derry’s response was rampant with Paul Cassidy left footed point before they hit a second goal. Brendan Rogers was fouled by Niall Morgan and Shane McGuigan slotted his penalty to the net for a 1-8 to 1-4.

Conor McCluskey they made a goal for Oisin McWilliams as Derry turned up the lead and Niall O’Donnell fisted over the bar – hist first score at inter-county senior level – for a 1-9 t0 1-5 lead.

McShane had a goal saved by Lynch with five minutes to go before Niall O’Donnell hit Derry’s third goal on the way to a first title since 2011. 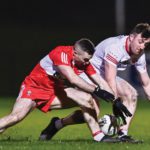 Another test awaits ahead of league opener 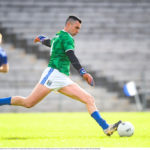 Final round of McKenna Cup games set for midweek