It’s just not the same

PLEASE God that the widespread distribution of these new vaccines permit normality to return as soon as possible. Obviously the most important thing is that the economy stabilises, but from a sporting perspective it’d be great to see the day when 80-odd thousand people pack into Croker again. I covered the Tyrone-Donegal match in Ballybofey a few months ago, and while it was as hard-hitting and competitive as you’d expect, there was no atmosphere whatsoever as the doors were shut to spectators. The only thrill from an auditory perspective was trying to eavesdrop on Stephen Rochford’s instructions to the Donegal players (he was sitting nearby) and Conor McKenna’s loud roar when he won a free off Neil McGee. Other than that, I might as well have stuck on a pair of headphones and listened to Chris de Burgh.

I CAN remember a few years ago, stroking my perfectly chiselled chin, sipping a moderately priced brandy, and expounding to a few friends and admirers about the state of the GAA. ‘The season is no good,’ I said, taking swig of the smooth liquor, allowing it to rest on my palate, like the blood on the tongue of a Mayo player, post Dublin shoulder-charge to the face. ‘The problem is that the season is too long. The inter-county season starts training in October, and the last game is played in the third week of September’. My guests’ knuckles were snow-white as the hung onto those wise words. ‘But it will never change because the GAA loves its traditions, and one of those was the third week in September, All-Ireland final.’ We’ve come a long way since then. No All-Ireland Club on St Patrick’s day. No third week of September final. And now an inter-county season that ends in July. I don’t drink with those friends anymore.

NIALL Scully is not everyone’s cup of tea. He is not really controversial, but he does seem to have a knack of making the most of contact and it seemed to wind a lot of Twitter up on Saturday night. Take away those angry eyes and you’ll see perhaps the most underrated player on this amazing Dublin team. He should have had an Allstar in 2018, and not just because I had backed him to do so, and he really is integral to this team. Against Mayo he had a big hand in both goals and just generally linked the play. Ciarán Kilkenny is playing a more direct role under Dessie Farrell, and it has led to more responsibility being placed on Scully’s shoulders. That Allstar may very well arrive this season.

Little wrong with a speech

I’M sure Paddy Heaney rubbed a lot of Antrim hurling fans up the wrong way when he penned a column last week calling for winning captain’s speeches to be scrapped. Personally I don’t see the harm, and as a Tyrone fan I’ll always remember Peter Canavan’s speech in 2003, as well as Brian Dooher’s poignant tribute to Cormac McAnallen after the 2005 All-Ireland final. It allows the winning team to have their moment in the spotlight, and I thought it was pretty ill-advised of RTE to cut away before Conor McCann said his bit. Of course, nobody’s particularly interested in what Stephen Cluxton has to say after Dublin’s latest success (though I’m sure he’s a pretty interesting guy behind the scenes), but on the whole it’s a tradition worth keeping.

Which side are you on?

There’s a civil war coming and you need to decide which side you are on. Are you with the patriots who believe that Dublin are a puppet for an evil organisation who are determined to make Gaelic football watchable. Or are you a revolutionary who believes that Ireland must divided into counties of equal amounts of people, and equal amounts of sexes, who will get equal amounts of money so that they can play in tier four football which gets equal amount of television coverage as tier one? You must choose now, because when the war stars, we need to know which foot you kick with. Lets face it, thank goodness something has come along that we can actually get angry about. None of the previous hoohaas; such as a government that didn’t sit for two years, an RHI scandal, Brexit, austerity,  got me going. But a civil war over Dublin, now you are talking.

Erne are no underdogs

I HAD a good chat with Fermanagh minor manager – and next year’s u-20 boss – about Fermanagh football. Hopefully the piece runs next week, because that will mean that their Ulster semi-final with Monaghan is still on the cards. For you see, Fermangh defeated Down at the weekend, a Down side that had been tipped as one of the favourites for the competition. Afterwards, McLaughlin said that people need to stop looking at Fermanagh as some sort of plucky underdog. He said attitudes need to change towards the county, and he directed that message to people inside the county too. In last week’s In Focus, Shane King said that his Fermanagh side were level with Armagh in the ‘90s until the latter took off. Why? Belief. Fermanagh don’t have it, but McLaughlin is determined to do his bit. 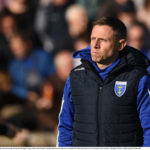 BLOG: All good wings must come to an end