Which club game, that you played in, will you never forget and why?
Probably the day the club won its first Senior Championship final in 1995. It was our first championship final since 1957 and we faced the holders Lisnaskea. I can remember most of the players being relaxed beforehand which followed on into the game. We were 10 points up at the beginning of the second half but Lisnaskea came back at us and there was only two in it at the end. The scenes after it were unreal, it was a significant moment in our club’s history.

Which club game, that you watched, will you never forget and why?
That would have to be the St Brigid’s v Ballymun All Ireland Club Final 2013. Ballymun went up 2-3 to 1pt after 10 mins and you would think they would push on. Had to admire St Brigid’s character and determination that day, they weren’t going to be beat. They were back on level terms by the 39th minute thanks to goals from Senan Kilbride and Karol Mannion. It was point-for-point from then on and the turnaround was complete when Frankie Dolan scored the winner in the last minute leaving Ballymun no time to get back up for an equaliser.

Which county game, that you played in, will you never forget and why?
Probably the U-21 Ulster Final v Derry in 1994 in Omagh which we won by 2-8 to 0-8. The Ulster campaign as a whole was a great journey, we went into each game as underdogs beating Donegal and Tyrone along the way. I was only 18 at the time and the team was full of quality players such as Paddy McGuinness, John Hanna, Shane King, Mark O’Donnell and Raymie Gallagher and managed by Jim Carty. The only disappointing thing was we had to wait three months for the All Ireland semi-final whereas Mayo played eight days after their Connacht Final.

Which county game, that you watched, will you never forget and why?
Probably Tyrone v Kerry in the 2005 All Ireland Final. The frantic pace of the game and the score-taking from both teams made it a game to remember. Then there were the scores from Peter Canavan – his goal in the first half and the point he scored when he came back on the field in the second half, this was to be his last game for Tyrone and he was going to go out in style.

What was the funniest thing you ever saw in a game?
I know he has mentioned this in his own questions so I would have to say Paul Ward. The accurate Shane McGullion was trying to hit me inside with a 30 yards pass but instead caught Wardy full up the face with it. As usual Wardy wasn’t stuck for a few choice words as soon as it happened but that made it even funnier. He was also the victim of a WWF move in a recent junior game where Neill Gallagher lay down in front of him and tripped him up landing him on his head – let’s just say it couldn’t happen to a nicer fella!!!!

What was the most memorable performance from a player in a game that you watched?
I would have to say Rory Gallagher’s 3-9 v Monaghan in Clones 20 years ago. Fermanagh were four down at half time and Gallagher just took control in the 2nd half – two pens, scores off his both feet and a fisted goal to finish. 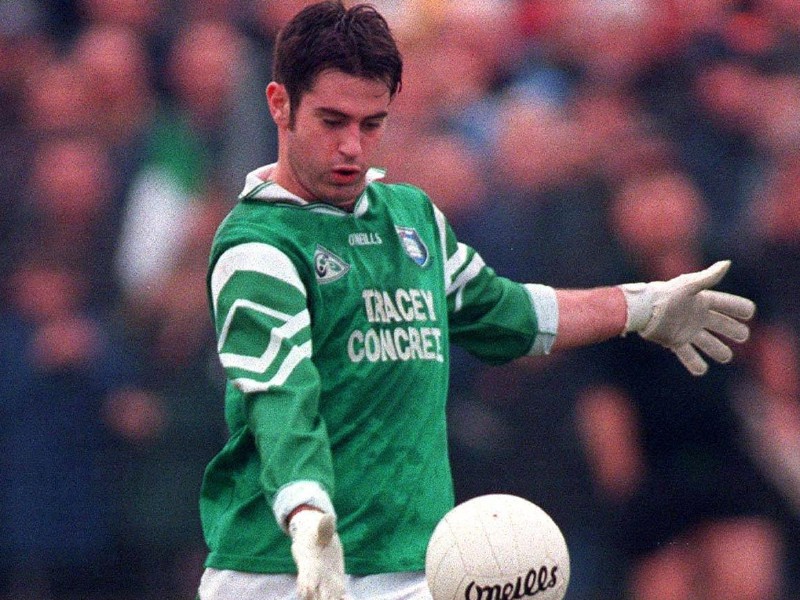 Would pick Dermott Feely for this one. He was the Derrygonnelly goalkeeper for over 20 years and always justified his selection with important saves throughout. One of his most important ones was in the 2016 championship final to deny Erne Gaels a goal midway through the second half, Seamus Ryder’s goal bound shot was brilliantly tipped over the bar if that had have gone in we possibly would have lost the game, but we ended up winning by one thanks to ‘Peggy’.

What have you loved about the games you played in?
The different challenges, meeting fellas from other clubs and great memories of playing with my club and county are something that I will never forget.

What have you hated about the games you played in?
Plain and simple, losing, can’t be talked to for a few days after a game.