IT’S going to be a busy weekend for Ulster counties as the NFL heads towards its final weekend of action.

Cavan winning promotion from Division Four with their victory in London and Down’s relegation to the third tier are the only certainties so far.

In Division  One, there is an outside chance of Kieran McGeeney’s Armagh reaching a league final with Kerry, when they travel to Ballybofey for a championship dress rehearsal with a Donegal team not out of the relegation mire.

Declan Bonner’s side are one of five teams that can mathematically still be relegated.

Monaghan escaped relegation on the last day of the season against Galway in Clones and they welcome Dublin who are seeking a result to beat the drop themselves.

Tyrone face a Kerry team with nothing to play for and in a rematch of last year’s Killarney clash that saw the Red Hands hammered out the gate.

All but Dublin and Monaghan can make the league final in division that comes down to Score difference with Armagh holding the upper hand in that regard.

There is a clearer picture in Division Two where Galway’s 4-11 to 0-12 win at Owenbeg has guaranteed Padraic Joyce’s side a league final spot and promotion.

They host second placed Roscommon weekend, who are a point ahead of Derry.

Galway could be without the suspended Paul Conroy, with Joyce indicating an appeal could be on the cards after his dismissal on Sunday.

Shane Walsh was rested and Damien Comer came off early in the second half with a ‘tight hamstring’.

Derry manager Rory Gallagher will be hoping the Tribesmen go hell for leather in Dr Hyde Park if they are to have an outside chance of promotion.

The Oakleafers are a point behind Roscommon in the table and head to Navan on Sunday with Shane McGuigan back after suspension, but Gareth McKinless will be missing following his straight red card on Sunday.

There is also a doubt over Oisin McWilliams who was forced off with an injured jaw that needed a checkup.

In Division three, former Tyrone manager Mickey Harte has steered Louth to the brink of back to back promotions, but below that Antrim are best placed Ulster team who can sneak the second promotion spot.

An Antrim win at home to Westmeath would be enough if Fermanagh can overturn Limerick.

If the Saffrons end level on eight points with Limerick, Westmeath and Fermanagh (an outside chance), Antrim’s score difference would see them promoted.

Fermanagh would need to beat Limerick by 19 points, if Antrim and Westmeath happened to draw, to finish in second place.

An Antrim win at home to Westmeath would be enough if Fermanagh can overturn Limerick.

In Division Four, Cavan are already in the league final and the only controversy surrounds the timing of Tipperary’s game with London.

It’s fixed for Ruislip on Saturday and the only one not played at the same time as others. Should Tipperary win, Sligo and Leitrim’s clash on Sunday will be a waste of time. 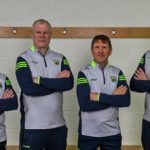 Opinion: The Kingdom to double up 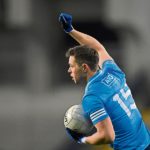 Quick off the mark