Do some work, and you could select a half back that could become the saviour of your team in a difficult league.

The half forward line is oft over-looked, because they tend not to deliver as much scores as the full forward or half back lines.

Donnelly has been moved to midfield for this year’s competition, Givney is not playing, and Campbell is a full forward.

That means that we are going to have to look elsewhere.

Armagh’s Aidan Forker has the potential to score  heavily in division three this year. He finished with 35 fantasy points last year.

Derry’s James Kielt is a solid option as well. He’ll be kicking most of the Oak Leaf frees in 2017.

Tyrone’s Conor Meyler is in line for a big year. He was injured in 2016 and didn’t realise his potential.

One other player to consider, and who could be a dark horse for 2017 is Cavan’s Gerard Smith. He’s a star at club level, and could break out this year.

Click here to login or register your team for the 2017 NFL Fantasy competition. 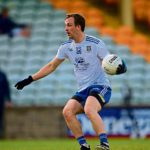 Jack McCarron among latest to head for the States