ULSTER hurling is in a good place insists Derry captain Cormac O’Doherty, who leads his side into this weekend’s Division 2B decider against Sligo.

Apart from Monaghan and Cavan, the rest of the Ulster counties were in the promotion mix last weekend.

“Without doubt,” replied O’Doherty of the steady improvement in the game across the province.

“Antrim will be playing in Division One against next year and Down have a massive chance this weekend to go and join them.

“It could’ve been us and Donegal in the final,” he added. “Armagh and Tyrone will play each other in a final and Fermanagh were already through, so Ulster hurling is definitely in a good place.”

O’Doherty captained Sleacht Néill to their latest Ulster success and was pivotal in their All-Ireland semi-final defeat to eventual champions Ballygunner.

Now in his sixth year as an inter-county senior hurler, O’Doherty is well-placed to run his eye over the hurling landscape.

“We’re are taking a step forward, but we need to make sure we don’t take two steps back that has been often the case over the last 10 or 15 years,” said the Derry skipper of his own county’s fortunes.

“Even across Ulster, teams have shown small signs of progress and then it halts for a couple of years.

“It is about trying to push everything on now. From a Derry point of view, if we can get a win this week and get up into (Division) 2A and really test ourselves against top opposition, then we’ll see can we consolidate ourselves there.” 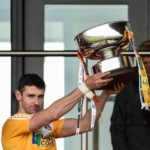