AOIBHINN McHugh has been named as the new Tyrone Ladies senior captain ahead of the start of the National League.

The 23-year old Aghyaran player takes over from Niamh O’Neill but comes to the role with plenty of experience having also served as a vice-captain before. She can’t wait for the new season to roll around this weekend, and plays down the notion that Tyrone are in a transitional phase right now.

“Transition isn’t a word that has been mentioned,” she said. “As a squad, we are training hard at the minute and focusing on preparing for our first game against Roscommon.

“I think everyone is keen to get underway this year, particularly with the full National League campaign returning again,” confirmed the St Davog’s midfielder.

McHugh has been with the Red Hand squad since a teenager, coming through the ranks under Gerry Moane and was a successful Ulster minor winning captain. She has firmly established herself in the senior starting fifteen and under previous captains, Neamh Woods, Tori McLaughlin and O’Neill, she has learnt her trade well.

Remaining positive and keen to see progress, McHugh is hoping for a good season and keen to make her own stamp on the captain’s role.

“I hope I can make a positive impact and that this is an enjoyable year for Tyrone ladies football.”

Meanwhile, the vastly experienced Niamh Hughes has been named as the new team vice-captain and she is expecting a tough league campaign.

“The league is tough, but we are used to that as the last few years we have been on the Ulster side of the league which is always tough with the likes of Armagh, Monaghan and Cavan,” explained the Magherafelt based teacher, who is also looking forward to the introduction of many new faces.

“We have a few new players in this year and the younger girls gaining experience will only strengthen the squad.”

Niamh is one of six Aodh Ruadh players in this year’s league squad. An exceptionally fit attacker, through the All-Ireland success of 2018 her lung-busting runs were a key factor in winning that title.

She reveals that there is a great atmosphere about the squad right now.

“We have been training hard and are looking forward to a full league this year which will only develop us as a team ahead of the Ulster and All-Ireland Championship.” 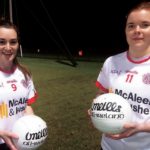 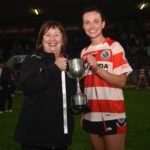 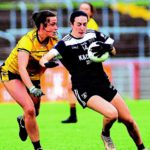