TYRONE started the defence of their Ulster and All-Ireland crowns with a fairly routine victory over Fermanagh at Brewster Park on Saturday night, though they did endure the odd rocky moment along the way.

Two consolation goals in the last ten minutes put a more positive spin on the final scoreline from the Erne perspective though by that juncture the visitors were very much home and hosed.

A goal in the run-up to the interval from Conor Meyler handed the Red Hands a one point cushion at the break- 1-6 to 0-9- and a fisted effort to the net by sub Liam Rafferty midway through the second period more or less put the issue beyond doubt.

Tyrone endured a nightmare start to proceedings with Michael O’Neill black carded inside the opening minute by referee Joe McQuillan and while Darragh Canavan did swing over a beauty to get them off and running, in the main their play was laboured and listless.

Inspired by the excellent Ryan Lyons, who floated over a couple of excellent scores, Fermanagh eased into a 0-5 to 0-2 lead by the 23rd minute, while Conall Jones also rashly fired over when through on goals.

With the likes of Conn Kilpatrick and Conor Meyler growing in prominence, Tyrone eased back into contention, with Darren McCurry three times on target, and when Meyler bustled his way through to find the net, it was the timely filip the champions needed.

Darragh McGurn registered a point for the hosts at the start of the second half but again he could have found the net, and his side came to rue this miss as the visitors slowly pulled away.

Kieran McGeary, McCurry and midfielders Conn Kilpatrick and Brian Kennedy each raised white flags, before Rafferty then swooped for the second goal after sub Conor McKenna struck the base of the post.

McKenna was also to hoist over two superb scores, though he was harshly sent off deep in stoppage time. By that stage Tyrone had already set up a quarter-final meeting with Derry, even though they will be disappointed at the nature of the goals they conceded late on to Conall Jones and Josh Largo Ellis. 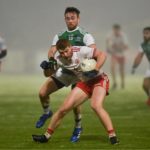 MATCH PREVIEW: A job to be done for the Red Hands