THROUGHOUT his club playing career with Pomeroy Ollie McCreesh’s name always featured high on the scoring charts as he helped the Plunketts to Intermediate success at County and Provincial level.

This year he reached the age to qualify to play Masters (over40s) football and after watching his brother Marty help win it last year he decided to give it a go. Along with his other brother Aidan they each collected All-Ireland medals at the weekend as Tyrone edged out Dublin 0-13 to 1-9 in Ballinagh.

“Our Marty won one last year and he was giving me stick that he had one and I hadn’t so I decided to give it a go and thankfully it worked out,” said Ollie.

“ It’s nice to win at any level. That’s what the aim was at the start of the season, an All Ireland title and it’s great to achieve that. It was tough going there throughout against a good Dublin side but at the end of the day it was a great way to win it, having to come from two points down and really earn it.”

McCreesh more than played his part in the one point success after extra time as he weighed in with the opening three scores for the holders as well as knocking over a free at a crucial stage in the second half. He was absolutely delighted at the final whistle having thought the opportunity to wear the Red Hand jersey had passed him by.

“ You think at forty that’s it, you will never get a chance to play for your County,” said Ollie.

“ Its not easy going out there at this age and trying to perform but when you are alongside the likes of Stevie O’Neill, Conor Gormley, Ciaran Gourley and Marty Grimes sure its brilliant like.

“ I thought at the start of the year that this may be a wee bit of a bluffing match but I can tell you now it was far from it.

“It was a slogging match at training but I have to say I enjoyed every minutes of it playing alongside these lads and against teams like Dublin and I would recommend it to any player to give it a go.

“ Those last few minutes when we were keeping the ball and trying to run down the clock it was tough and the legs were getting wobbly. We were able to hold on though and when the final whistle sounded it was an unbelievable feeling to be an All Ireland winner.” 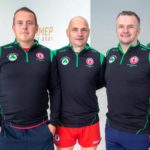 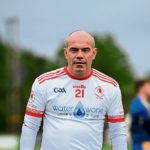