A STRONG indication of the build-up in preparations for the Tyrone Senior Championship was provided last weekend when Coalisland welcomed back two players set to be pivotal figures for them in this year’s title-race.

Michael McKernan and Niall Devlin were among a raft of Tyrone players – a list also including Ruairi Canavan, Conor Melyer and Matthew McGleeenan – who made the trip to the United States for the summer. Now, though, the Fianna duo are back and ready to concentrate fully on the Fianna’s bid which begins with a tough opening day encounter against Carrickmore.

In addition to preparing for that big game, Michael McKernan and his Tyrone teammates will also have one eye on the resumption of training and the chance to exorcise the disappointments of a premature conclusion to their 2022 season.

“The disappointment it’s still there obviously and it will be there until next year when we get playing again,” he added.

“Going to America takes your mind off it for a while. But whenever you’re back you’re focused again for Coalisland firstly and Tyrone will be starting up shortly.

“We have to look at last year, and we just can’t let it go without reviewing it. We’ll do that and take it from there. It’s just about hard work in the pre-season.”

While in the US he lined out with Chicago Parnells. They lost in the final of the Chicago championship to Pearses by 11 points.

Nevertheless, the experience was one that he enjoyed despite the obvious difference between playing in Ireland and over there.

“It’s 13 a side in America, and there’s more space in the heat. It was hot enough out there and nearly too hot,” he added.

“The experience was unreal. It’s one of those things that if you get the chance, you should probably do it and get away for a time.

“It was a chance to re-set and relax and get ready again for next year and the rest of this year.”

McKernan got a taste of domestic action for the first time last Sunday in the derby clash against Clonoe at the weekend. Victory for the boys in blue has set them up nicely, but they’re well aware of the need to be on top form as they aim to emulate the progress of 2021 when they reached the County Final.

“It was good to get back to club football, and get back to playing with those boys. It’s a hard old battle to get back into,” he remarked afterwards as he recovered from a lively return to the competitiveness of the Red Hand All-County League.

“There were a few things that we had to fix ourselves, winning tackles and stuff like that. When we got that sorted, we knew we had the ability to grind out a result.

“It’s good being back home. America was enjoyable, but here is where you want to be playing. It’s good to get away, and it’s even better to be back.

“The boys have been building momentum and hopefully we can carry it into the championship too. All the games are important now at this stage of the year. We’re getting to the real part of the season and we want to be starting to come good.” 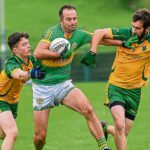 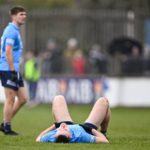