THE full fixtures itinerary for the upcoming club championships was published this week with the curtain raiser for the senior tournament set to take place between Trillick and Dungannon Clarkes on the evening Thursday, September 22.

Every first-round game in the Senior Championship will be played off in a five-day period centred on that same weekend, climaxing in a Monday night meeting of Carrickmore and Coalisland on September 27.

The Intermediate Championship will commence with the first round clash of Tattyreagh and Eskra on Thursday, September 15, while the Junior Championship kicks into gear on the previous Sunday with a double header between Stewartstown and Donaghmore Thirds followed by Brocagh and Errigal Ciaran Thirds.

The Tyrone Championship will be the last to get underway anywhere in Ulster, but that comes with the caveat that most of the other counties opt for sometimes-protracted group stages, as opposed to the tried and tested straight knock-out format in Tyrone.

While some clubs will already have their looming championship campaigns firmly in their sights, others will be fully focused on what’s likely to be a dramatic conclusion to the All-County Leagues.

In Division One, the top four teams (namely, Killyclogher, Trillick, Errigal Ciaran and Carrickmore) are deadlocked on 19 points each with two rounds remaining) while a number of teams are engaged in a fierce battle to avoid relegation.

In the second flight, Eglish claimed a crucial win over Galbally last weekend and will achieve automatic promotion if they win their final two games, while Clogher, Eskra, Tattyreagh and others are stuck in a fight for survival at the other end of the table.

Meanwhile at Junior level, Stewartsown have only lost a single game all season and are poised to take the title with three games remaining, though Strabane are second and could still theoretically pip them at the post. 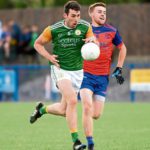 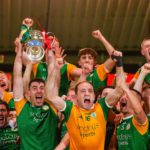