WHEN Stewartstown conquered Ulster in 2004, Greg Kelly was a 16-year-old goalkeeping understudy to Jonny Campbell, but he’s the man between the posts this weekend.

The Harps take on Cavan champions Drumlane aiming to become the first Tyrone winner since Rock took the Paul Kerr Cup home in 2016.

“It’s a brilliant to be back in a final and hopefully it will be a good day out for the club,” said a smiling Kelly after Sunday’s win over Letterkenny Gaels.

“This is an excellent time of the year and it’s great to be involved in Ulster and not stuck in a relegation battle.”

Kelly made a fine double save in the second half and kicked with variation over the hour before being caught out with Paddy Doherty’s late goal in an otherwise flawless performance.

With Dan Lowe and Gareth Devlin sharing 1-12 of the Stewartstown tally, they also left a host of other chances behind them.

“It was obviously a bad performance there today,” Kelly admitted of his side’s performance.

“We played 10 or 15 minutes of football and it was enough to get us over the line.”

It was a second meeting of the teams, with Stewartstown running out 3-11 to 0-7 winners over Letterkenny on the way to winning the Ulster League.

The Harps are unbeaten so far in a season that also brought Tyrone league silver to Mullaghmoyle.

The only blot on their season was a 2-9 to 1-12 draw at Drumragh back in July when substitute Dan Lowe’s 57th-minute free capped off a comeback from nine points down on an evening when Cathal Devlin thought he had won the game with a late point only to see it waved wide.

“Even with the friendlies during the season we haven’t been beaten all year,” said Kelly who pointed to the games played in training as a help to sharpen their play.

“There is plenty of competition in the squad and we have been top scorers in Tyrone this year and not one of our players finished in the top eight of junior football.

“There are seven or eight boys getting on the score sheet most days, so that is a big plus when everyone can have a pop.”

After their relegation last season, the squad sat down with joint managers Blake Smyth and Peter Armour to get the plans in place to bounce back to the intermediate grade.

“They have played with us all, they are from the club and they know what it is like to be here on these days…they have plenty of experience,” said Kelly who stressed the need for more improvement for the biggest day in the club’s season.

“We need to pick it up massively for Drumlane, that (semi-final performance) won’t be good enough.

“They beat Craigbane and Clones in Clones and it will be their third time there so they will know the pitch well. We’ll go there and give it a rattle to see how we get on.” 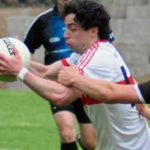 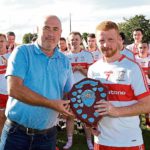 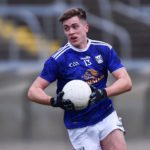 ‘No pressure’ on Drumlane says Dunne