TYRONE INTERMEDIATE CHAMPIONSHIP ROUND ONE

TATTYREAGH are the happier side going into this match as they staved off relegation while Eskra finished rock bottom in Division Two. The Tatts, who are managed by Eskra man Chris Kelly, are in a rich vein of form and are favourites to advance.

BERAGH pummelled Naomh Eoghan when they met in last year’s championship with Jack Campbell scoring an incredible five goals. It’s hard to imagine it’ll be so one-sided when they meet again this weekend. A 50/50 contest but we’ll give Beragh a hesitant nod.

THIS is the third championship meeting between these two teams in as many years. They played out a remarkable semi-final last year with Owen Roes prevailing on penalties. Gortin have enjoyed a better league campaign but Brian McGarvey’s absence with injury is a big blow. We’ll still tip them to advance.

THESE two sides had contrasting fortunes in the league. Eglish bounced back to top flight football at the first time of asking by winning the Division Two title while Clogher are set for the relegation play-offs. Conor McKenna is set to line out for Eglish before heading back to Australia and they should win this.

LAST year’s Junior Champions Cookstown had a poor league campaign albeit they finished reasonably strongly. Killeeshil had a much better campaign and have a nice balance to their squad.

AGHYARAN haven’t a great championship record and it’s 34 years since they collected the Paddy Cullen Cup. However, it wasn’t long ago before they played Division One football in Tyrone and they’ll be very disappointed if they don’t win this one. The Rock are a steely side and you can never totally discount them.

A HUGELY appetising fixture between two of the contenders for the title. They met in the decider in 2019 with Galbally edging matters by a historic point, and both have spent time in Division One in the intervening period. Pomeroy have improved massively since Kieran McGeary and Frank Burns returned during the league. A genuinely very tough one to call.

IT would be no major surprise if Edendork win their second championship in three years given they can call upon Darren McCurry, Conn Kilpatrick and Niall Morgan. Kildress have had a fine season and still have a chance of reaching promotion through the league, but they’re underdogs for this one.

TYRONE JUNIOR CHAMPIONSHIP ROUND ONE

CLANN na nGael’s league campaign proved pretty decent in 2022 with a respectable joint tenth table slot. Derrytresk finished a disappointing 15th but they’ve proved in the past that they can be a force to be reckoned with come championship time. We’ll still give the north Tyrone side the nod.

GLENELLY have been a reinvigorated outfit under their new manager Diarmaid McNulty this season, finishing just three points off the top four. Urney finished mid-table but they could be dark horses for the championship as they’ve built up a head of steam in the second half of the league.

FINTONA have had their best league campaign in many years and will duke it out in the promotion play offs. Brackaville have a proud tradition in the Junior Championship but haven’t fared well in the last few seasons. Fintona might snatch this one.

AGHALOO have been in great form after the disappointment of last year’s relegation from Division Two. Drumragh have been knocking on the door in recent seasons but Aghaloo have the momentum heading into this one.

BOTH these sides came through their respective preliminary round contests at the weekend. Errigal Ciaran ‘Thirds’ have some fine players like Darren Canavan and former Tyrone star Davy Harte, but Stewartstown won the league and it would be a surprise if they don’t slip into the quarter-finals.

THIS will be Strabane’s first foray into the Junior Championship since 2008 when they narrowly lost out to Augher following a first-round replay. They had a very stellar league campaign whereas their opponents finished 11th in the table. It all points to a Strabane victory. 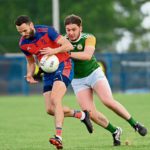 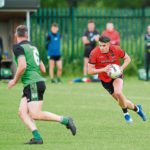