HAVING at last ‘filled a gap’ on the Dunmoyle clubhouse gallery of past champions, Ben McDonnell appreciates that replicating the classes of 1993 and 2002 will be an even sterner test for this current Errigal Ciaran side.

The Tyrone campaigner played a starring role as Errigal bridged a ten year gap to annex the O’Neill Cup just under a fortnight ago with victory over old adversaries Carrickmore in a riveting decider.

Now that the celebrations have died down following their Tyrone Championship victory, the team will have turned their thoughts away from parochial affairs and towards the provincial stage.

They couldn’t have been handed a more difficult opening assignment in Ulster, a meeting with Derry champions Glen, managed by former Errigal favourite Malachy O’Rourke, at Celtic Park on Sunday afternoon.

Tyrone’s risible track-record in the Seamus McFerran Cup has been well-documented with different theories spouted down through the years attempting to rationalise the litany of failures.

The only twin triumphs registered over the past fifty years were by the current champions Errigal in 1993 and 2002, but Ben McDonnell accepts that his side face an arduous opener if they are to keep alive hopes of a third Ulster senior club title.

“Errigal has a good tradition in Ulster but Tyrone teams in general haven’t had over recent years. We meet Glen who will be among the favourites. It’s going to be a tough task. Malachy O’Rourke knows this Errigal team inside out, he lives in Ballygawley.

“The teams wouldn’t know each other as well as they do rivals within their own county so the games can be a bit more open and better to watch. But no doubt they will be targeting the star men like Petey Harte and the Canavans. It’s a good time for other men to step up to the plate and push us on.”

Twenty-six year old McDonnell was one of those trusty foot-soldiers who put his shoulder to the wheel in the County Final, just when Carrickmore were threatening a second half fightback. His dynamic runs helped to puncture holes in the Carmen rearguard and set up vital scoring opportunities for his grateful colleagues.

He was delighted at the manner in which Errigal rode out the storm to emerge as County champions.

“ We knew we were in for a battle with Carrickmore. They have that Championship pedigree in their history. They came up to Dunmoyle in the League Final last year and bullied us all over the pitch so we knew that they would come out and get stuck into us. So that second half fightback wasn’t unexpected, it was up to us to deal with it when it came along.”

Unfair or not this Errigal team were developing an unwanted ‘bridesmaids’ tag after a serious of near misses in big finals over recent seasons. Ben was delighted to silence the carpers once and for all.

“There has been a lot of criticism of this team individually and as a unit over the past couple of years. The pressure was really on us coming into this season. It was great to make the breakthrough and to be able to draw a line under the criticism and the defeats we have had since we last won in 2012. We hopefully can build on it now.”

While admitting that the pain of losing last year’s crushing semi-final against Coalisland took a long time to ease, McDonnell stated that the squad came into this season determined to wipe the slate clean.

“ Personally it was probably the worst defeat I have ever suffered because of the nature of how we lost it conceding those late goals. We were sore for a lot of months over the winter but this team learnt a lot from that and built from that.

“We decided coming into the season to draw a line and try and forget what happened before and just look to make amends and rebuild. We have a few fresh players coming and and the management took a different angle on things too. Thankfully it worked out.

“This is a relatively new team. I captained the Under-16s ten years ago before the Senior decider so there was a good core of lads from that side who featured against Carickmore in this year’s Senior Final. It was good to write a bit of history for ourselves.

“As Tommy (Canavan) said in his victory speech there is a gap in that wall (clubhouse roll of honour) and it has been there to long. It will be good to have our picture up there now as well alongside those great teams of the past.”

Having savoured being part of the Tyrone All-Ireland winning panel last year, McDonnell was candid enough to admit that there was something uniquely special about winning with your club.

“ It’s special winning with your club. When you look around and see members of your own community hugging you after the final whistle, it’s hard to keep your emotions together, especially with the hurt this club has been through over this past ten years to get here. It was just great to put smiles on people’s faces again.

“ I felt sorry for the Carrickmore boys afterwards because it’s not nice to be in that position. We’ve lost two recently and we had a lot of regrets after those matches. We just took it on board and learned from the experience. It was just good to be on the other side this time around.” 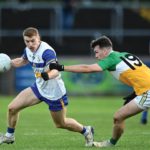 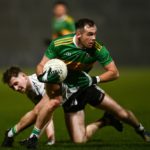