GALBALLY skipper Aidan Carberry held aloft the Paddy Cullen Cup ago after a sensational victory over Edendork in the Tyrone Intermediate Championship three weeks ago, but the celebrations have been put on hold as they look ahead to Sunday’s provincial opener against Glenullin.

The Pearses embarked on a memorable run in the provincial arena in 2019, reaching the final where they fell short against formidable Monaghan outfit Magheracloone, so deep inside they’ll feel they have the potential to go one step further this time around.

Their full focus for now though, will be on Derry side Glenullin, who are managed by none other than Paddy Bradley, a native of the club. His younger brother Eoin ‘Skinner’ Bradley is still lighting it up at the age of 38, and they’ve a handful of other players still knocking around who won the Derry Senior Championship back in 2007. They’ll be no pushovers, as Carberry acknowledges.

“We’re only thinking about Glenullin at Celtic Park this Sunday. The Ulster Championship was a great experience in 2019, the buzz in the club and among the supporters, so we’re mad to get on a run but we can’t look past Sunday.

“They’re a dangerous outfit with a lot of senior experience, and a group of their players won a senior championship. They’re an experienced team and they’ll be hard to break down, but we just have to worry about ourselves and see where that takes us.”

Galbally’s dramatic victory over Edendork was not only unexpected (outside the club at least) but saw them pick up only their third-ever championship title at adult level. It was a momentous achievement, but it wasn’t too long before they turned their attention to Ulster.

“We’d obviously a bit of celebrating to do, but we got back to training on the Friday and started to think about the next game.

“The difference with Ulster is that, to some degree you’re going into the unknown whereas in Tyrone you know everyone like the back of your hand. You’re focusing on what you can do, rather than worrying too much about the opposition – we want to get the very best out of ourselves and we’ll take it from there.”

It’s not their main priority this week but Galbally will also want to establish themselves as a recognised Division One side down the line, now that they’ve won their second Intermediate title in four years. They have the talent to do so – Conor Quinn and Liam Rafferty were part of Tyrone’s All-Ireland winning set-up last year, Daniel Kerr also has experience of playing for Tyrone at senior level, and Conor Donaghy is one of the best free-takers in the business.

“The big aim at the start of the year was to get back to senior football, it’s where any team wants to be. Once this season is done and dusted, that’ll be the next aim, to test ourselves in Division One and hopefully get a foothold there. We have good enough players in our view to do that.”

Carberry also hailed their management duo Paddy Crozier and Joe McMahon, who have led the team to championship honours in their first year on the line.

“The players have bought into everything, and that comes from trusting the management and recognising what a great set-up we have.

“Joe’s training has been unbelievable, you’re always learning something and nothing’s ever the same. Paddy brings a good buzz to the team, and the thing about Paddy is that he always worries about the man before the player, making sure you’re happy.” 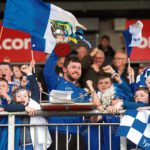 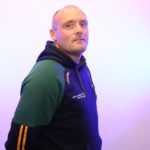 Bradley feels Glenullin have a chance of causing an upset