ANOTHER big step on the road of progress arrives for the Tyrone camogie team this weekend when they play Wicklow in the Nancy Murray Cup Final.

Numerous good displays from a talented group of players have seen the side make progress recently. But the chance of winning this Cup would represent a massive boost for the team and the growing promotional efforts being made throughout the county.

But they will have to be at their best against a Wicklow side which has already beaten them in this competition last month.

It’s a challenge for them, and one which their team manager, Declan Sherlock, and the players are certainly relishing.

Tyrone will be missing a number of players. Joint team captain, Catherine Muldoon is unavailable, talented goalkeeper, Eimhear Colton is injured as is Roisin McErlean.

They will make the relatively short trip to Inniskeen for the 1pm throw-in on Saturday.

While the camogie focus across the country will be on the All-Ireland Finals at Croke Park on Sunday, the Red Hand quest for glory carries with it the promise of perhaps reaching headquarters again sooner rather than later.

For the moment, though, Declan Sherlock and the Tyrone players are fully concentrating on overcoming the Garden county. Suffice to say, they realise what’s being demanded from them according to their Offaly-born manager.

“We have played them twice already this year – once in Carrickmore and the second time down in Wicklow and they beat us both times. In the first game, we were just getting together, then the second time in Wicklow the result of the game didn’t really matter in terms of getting to the final,” he said.

“That game was neck and neck for ages and they pulled away in the last five minutes. But it’s totally wrong to say that we don’t have a chance because everyone is going down fully determined to win and we have that belief in ourselves.

“After completing in the past three Nancy Cup Finals, this is an opportunity for the players, especially after losing by just a point to Mayo in 2021. It would be great to get over the line and move up to where we should be at Junior level.”

One of the significant things about the current state of camogie has been the growth of a number of fairly new clubs. While Eglish remain the top team at adult level, the performances of Dungannon, Omagh, Carrickmore and Edendork among others are providing much encouragement.

Further evidence of this positivity can also be gained by the fact that an Armagh team which only defeated Tyrone narrowly two years ago will play Antrim B in the All-Ireland Junior Final on Sunday. However, while this are encouraging signs, the task of winning on Saturday remains for the players.

There is no denying the desire of this Tyrone team to win, and that determination could have a significant impact when the action gets underway.

“We have become rivals with Wicklow and don’t forget that Knockananna won the All-Ireland Club by defeating Derrylaughan in the final, after losing to Dungannon the previous year,” Declan Sherlock added.

“They have a few marquee players and we’ll have a plan for them just as they’ll identify our strengths. Who knows who plays and they may have a surprise player to come on. It’s like a game of chess.

“We have a few players absent but we never worry about who isn’t available. It’s about concentrating on who is there and getting the most out of them.”

In the greater scheme of things, this is an important milestone for Tyrone camogie.

Camogie titles at adult level have been rare and they will be hoping to finally get over the line.

“It will be great for the development of the game if we do win this title,” the manager adds.

“This will give our young players something to aspire for. I know it’s not the top level game, but the next level up is played in Croke Park and if we win this then Croke Park is our target.

“The players will give this everything that they have and hopefully if things go right on the day then we will come away victorious.” 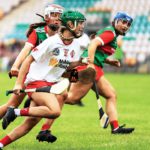