Advertisement
HomeCountiesMonaghanMonaghan Club FootballTruagh on the brink of history
Advertisement

TRUAGH Gaels have a free shot on Sunday (2.30) in Clones as they take on champions Scotstown in the Monaghan championship final this weekend.

Wins over Clontibret and Ballybay, both against the odds, set them up for a first appearance in the decider in 20 years, when they lost to Castleblayney in the 2000 and 2001 finals.

“The bookies aren’t giving us a hope and my Da would always tell me you’d never see a poor bookie,” joked Truagh coach John McElholm.

“We’ll not approach it like that. Momentum is a great thing going into any championship and we’ve developed well.”

Truagh were ‘well beaten’ at the quarter final last season by Inniskeen in a day they were missing injured duo Gary Mohan and Eoghan Kelly, with Niall Rooney and Pauric Treanor working overseas.

“Anything that could’ve went wrong, went wrong,” said McElholm, now in his second season. Larry Strain has since moved back to take charge of Omagh, with Pascal Canavan taking over as manager in Truagh.

After a haphazard season with Covid restrictions, McElholm feels his squad have benefitted from a ‘good block’ of training and it has stood to them in their wins over Clontibret and Ballybay, when they’ve had to move up the gears.

They now face Scotstown, the team that ended their league hopes in the quarter-final stage. And there is a buzz around the place that comes from the absence from the top end for the last two decades.

“The flags are out and the social occasions are organised,” said McElholm, who stresses that players have to take in a certain amount of the build-up.

“There are cars painted in the club colours and they’ll be painting the cattle next. There was great support at the semi-final last week and everybody is looking forward to it.

“I think it is important they enjoy it, it is all part of the experience.”

“Nobody gave us a chance,” he added.

“Ballybay, Clontibret and Scotstown are the big three teams in Monaghan. To get over two of them we did it the hard way. We didn’t make it easy for ourselves the way we started both games, but we finished well and we’ve developed a bit of confidence.”

Now Truagh face into the ultimate challenge, a Scotstown side that McElholm compares to Crossmaglen in their pomp as they dominated the Armagh scene.

The Tyrone native feels that blooding some new players this season has left Truagh well-placed for the future and has created the important mix of youth and experience, that has blossomed by beating two of the best teams in Monaghan.

Paudie and Christopher McKenna are back from injury, with Gary Mohan shooting the lights out in attack.

“We have a strong bench who’d be considered starters any other year,” McElholm said. “We have brought in a couple young lads.”

Louis Kelly and Ronan Boyle, the latter of whom was a minor all-star, have represented the club at minor level.

“Louis is a big strong and mobile player and he is very strong on the ball,” he added. “Ronan has slotted in and Gary Mohan has been injury free, he has played every game and he is a handful. He will give any full back a run for their money.”

McElholm has been pleased with the response of the players who have given every sinew in search of moving the club up the pecking order as they begin to look towards a regular seat at the Farney county’s top table.

“It gives the boys a chance to make a bit of history,” he said about Sunday’s clash.

“Truagh have never won a championship and who knows, anything can happen on the day.

“They are all at a good age and there are very few players in their last few years, so they have a good age profile, like a team that are going to be around for a few years to come.”

Last year it was Dungannon in Tyrone. There was Mullinalaghta in Longford. There is always a story that beams across the club championship. That’s the romance of it.

The people of Truagh will hope their band of brothers are preparing to write their own chapter. 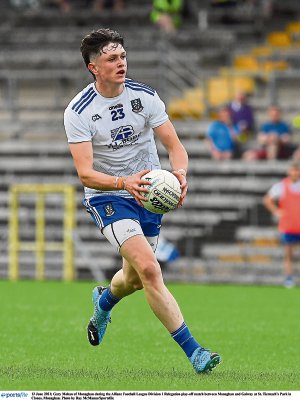 SCORER… Gary Mohan is having a great season for Truagh

RETURNING… Christopher McKenna is coming back from injury for Truagh