TÍR na nÓg are expecting a tough encounter when their Antrim SFC campaign gets off the ground with a trip to Gort na Mona insists Ciaran O’Neill.

The reigning intermediate champions were on the right side of a narrow win when the sides recently met in the league, a result that helped secure the Randalstown-based club’s spot in the top-flight for 2023.

Back in the senior ranks this season, there was “no real pressure” and they targeted certain games to tally up the league points required to stay up.

“Against the Creggans and the Cargin you were not expecting to come away with two points, that was a sort of a learning curve,” said O’Neill, a former Antrim u-20 captain.

There was a realistic sense they’d end up in the “bottom seven” after the league split and they’d have a battle to beat the drop in Division 1B.

Division 1A was a forgone conclusion with Creggan and Cargin pulling through from a “three-horse race” that also included Portglenone.

“In 1B we didn’t know who was going down and nobody would’ve saw Aghagallon going to the play-offs,” he said.

Gort na Mona finished bottom and were relegated with last year’s senior finalists Aghagallon facing a play-off with Liam ‘Baker’ Bradley’s All Saints team who finished second in Division 2A.

With the bare 15 players, Tír na nÓg ran St Gall’s to two points in the opening game of Division 1B in Milltown before rolling up their sleeves on a run-in that has built momentum ahead of the this weekend’s championship opener.

“We had an uphill task and had to get points from every other game we played,” O’Neill said.

“We played Naomh Éanna at our pitch and were lucky with a last minute equaliser. We came from five points down with three minutes to go, so there was some buzz. Any of the bottom seven teams any other on their day, all of the games are hard to call.”

A four-point win over St Brigid’s was followed up by a win over Gort na Mona and a draw with Aghagallon to secure safety.

O’Neill was among 11 dual players on hurling duty (who have played 30 games this season already) last weekend as manager Michael O’Kane tries to balance the workload.

Aghagallon beat Gort na Mona in the first game of the Championship and O’Neill feels home advantage is an extra factor.

“Up in Gort na Mona, they are a different team,” O’Neill stressed. “They know it (home pitch) well, it is tiny and they know how to play football on it…it suits them down to a tee.

“They have a system that works perfectly for them, that’s going to be a hard task for us to break it down and get over the line.”

After beating Gort na Mona by 11 points earlier in the season at home, it was a much tougher task for the return leg in Belfast.

“It was a completely different Gort na Mona team than we played in the second game of the league,” O’Neill said of their second meeting that relegated the Belfast side for 2023.

“It is going to be the same on Sunday when we go in there… they are going to give us their fill of it.

After Sunday, Tír na nÓg will host Aghagallon with the top two teams in their three-team group advancing to the quarter-finals. 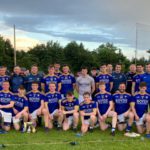