Former Derry star Paul McFlynn has noticed a huge shift in the world of conditioning across the GAA since his own playing days.

IN the days after Eoin McEvoy lifted the MacRory Cup, the St Mary’s Magherafelt past pupils’ WhatsApp group was pinging with messages.

Paul McFlynn was part of the 1996 team that reached the school’s first final, losing to St Patrick’s Maghera.

It was an era when both schools backboned Derry’s minor winning team of the previous summer and they’d lose out to a replay to Donegal later that summer.

The 26 years since their final MacRory season saw huge advancements in team preparation and it’s not just confined to senior level.

While some people are sceptical of development squads, McFlynn feels Derry, as a county, are all the better for them.

It’s getting the minors through the u-20 window and to the top table of inter-county senior. That’s the big picture.

Now part of Glen’s underage coaching system – where he now lives – and in his job as PE Lecturer in Ulster University, he is well versed in the current landscape.

“We were looking at the MacRory and Eoin McEvoy lifting the cup and looking at the arms on him,” McFlynn said, of the messages being passed among the players of his ilk.

“People took a few photos of clippings from the time we played Maghera, when you look at both teams, you notice the difference in the physicality.

“One of the boys said there wasn’t a muscle between the 30 of us in comparison to those boys.” 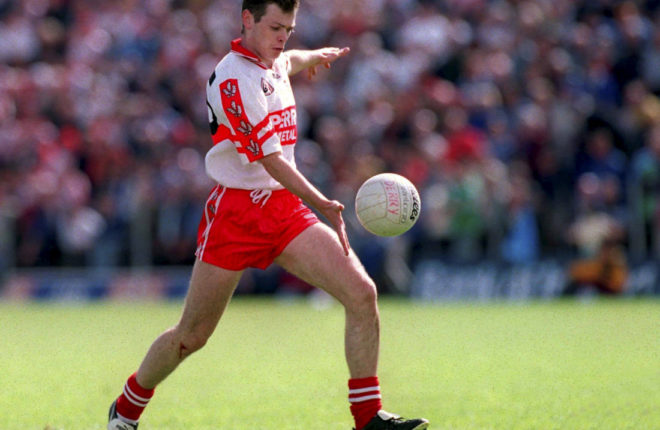 IN THE BEGINNING…Paul McFlynn in a championship action against Cavan in 1999, the first year he was introduced to strength and conditioning

Some of the comments ‘Geezer’ made in a recent interview struck a chord with the former Loup star. In particular, he noted how McGeeney emphasises the tools at the current county players’ disposal, in terms of knowledge and guidance in the world of physical conditioning.

After two years at minor level, McFlynn joined the senior panel in 1997 under Brian Mullins. For three years he mixed u-21 – including a winning All-Ireland run – with Sigerson Cup action with St Mary’s University College in Belfast.

“We didn’t do any strength and conditioning specifically,” McFlynn points out. Some counties may have, he can’t fully say, but Mullins was like many of managers of that era – circuits were the conditioning method of choice.

It followed on from the nights in St Mary’s Clady school hall, under the guidance of Chris Brown when a circuit session was followed by indoor basketball. Players of that era often memorably reference those nights, citing the craic as players from different clubs and schools bonded into the red and white of Derry.

“The most anybody was doing was the odd bench press in the gym, doing that and if it was too heavy, set it down,” McFlynn said of what weights amounted to back then. “They may have been other teams doing it but we certainly weren’t.”

If he knew then what he knows now, his ability to fend off injuries could have been so different.

“I suffered a lot from hamstring trouble…bits and pieces like that, as did other boys,” McFlynn offers.

While he feels it is anecdotal, he has noticed a decrease and puts it down to the level of science and knowledge now at the forefront of strength and conditioning coaching within teams.

“The programmes are so precise, accurate and well-informed by research, that it is very rare to see people suffering with those issues,” he said.

“I know big Enda (Muldoon) would’ve suffered a lot from hamstring issues and in our Derry squad, there were a number of us like that.”

Now, he feels, the long-term injuries are petering out as a result of the strong foundations built in across players’ careers, even offering a lessening of cruciate injuries.

Across the road from Maghera’s luxurious Movie House cinema sits the now defunct Maghera Recreational Centre, replaced by the new centre elsewhere in the town.

Mullins stepped down after Derry’s 1998 All-Ireland semi-final defeat to Galway and there was a return for Eamonn Coleman, who brought Martin McElkennon on board at the start of the 1999/2000 season.

McElkennon, armed with a qualification gained in New Zealand, introduced him to the world of strength and conditioning in those sessions in Maghera ‘Old Rec’. 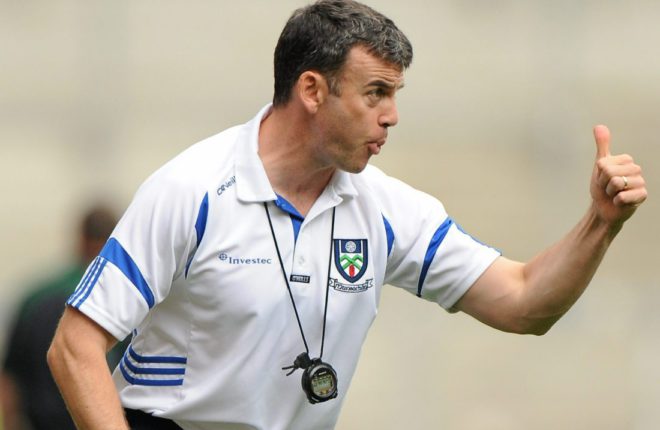 “Marty took us for circuits and weights every Tuesday and Friday night,” McFlynn remembers.

“He is probably one of the top strength and conditioning coaches in Ireland and by his own admission; he was starting off and learning.”

It was the footing that helped the Oakleafers win the 2000 NFL, run an upcoming Armagh close in the Ulster final and take Galway to with a swing of Matthew Clancy’s boot away from the 2001 All-Ireland decider many Derry fans feel they’d have won.

“Marty, at that stage, was the best and has continued to be the best and was ahead of his time with some of those things. That was my introduction to weights as a 21 or 22 year old really.”

Enveloped in this era was McFlynn’s input into Loup’s Derry and Ulster titles of 2003.

He called time on his Derry career three years later and, after John Brennan had him cajoled out of Loup’s reserve championship winning team he was part of their 2009 senior team to bring home a second John McLaughlin Cup to cement their standing in the Derry club scene.

He has had experience of coaching at club level and was involved in Antrim under Liam Bradley. In recent years he has sifted some of his efforts into Glen underage coaching and having previously had a column in the County Derry Post, has popped up on the sidelines in a co commentator capacity.

A common theme to McFlynn’s take on the development of physical fitness is the level of ‘shift’ on a number of fronts.

“When you think back to the infamous Maghera days in the MacRory, Adrian (McGuckin) would’ve had a big focus on circuits back then.

“St Pat’s teams were fitter and stronger than a lot of other teams, in terms of what they were doing with the circuit work,” said McFlynn, who took a similar approach with MacLarnon Cup teams when he taught in St Louis Grammar School Ballymena.

“There was never any recognition in your head of going down the real strength and conditioning route,” he admits.

There was a stigma of players bulking up too much and it ‘stunting’ growth.

Having taken a change in career path, Paul is the Course Director on the PGCE PE course in Coleraine and is the chair of Northern Ireland’s Association for Physical Education.

“It has come on so much, even at school level,” he said of the last decade of developments.

“You go into any school and there is a strength and conditioning suite, that was unheard of years ago,” he outlines.

Now, the ambitious sporting students are swapping any idle time in free lessons with churning out an extra session in the gym.

Of the PE students under his watch, across a range of sports, they are all following a dedicated conditioning programme with the team they are involved with.

“It is about getting in those extra sessions and chatting to some of them about how specific the work is,” he said.

“It’s all planned out and somebody is providing them with a programme that is personal for them.

“That’s how things have also shifted. You would’ve had a generic approach, with everyone doing the same thing. Now, teams are tailoring the programme to make them so specific to the individual’s needs.”

One plan could be dedicated for a player bulking up, another tailored towards getting someone leaner. Explosive and power are among some of the key words.

There is an adaption depending on the playing position. Another factor is different needs of the young starlet stepping out of underage to the seasoned campaigner needing a plan for maintenance, both coated with a consideration for injury prevention.

While having a general knowledge of fitness, from his sporting and academic experience, McFlynn is ‘not an expert’ in the world of strength and conditioning. If he was asked to oversee a plan for a team, he’d decline.

McFlynn leaves it for the experts, also throwing in the name of Ollie Cummings who has worked with a raft of athletes and teams, most recently the Kilcoo senior team and Sleacht Néill’s players across all three codes.

“Marty took a career break from school to visit Australia and New Zealand to find out what was going on there and keep up to date with their research.

“It’s not as if these boys stand still, they move with the times, they progress. There has been a shift at the level of expertise involved, not only at county level but at club level.”

This is the type of refined knowledge that ‘can only be good’ when fed into clubs from those who are ‘experts’ in the area.

“Then you can be rest assured that it will be done right,” Paul stresses.

There is yet another progression to reference, how conditioning is an all year round element of preparations. Gone are the days when players at the top level ‘winter’ before coming back to lose some of the accumulated ‘timber’.

The initial running slog, in the past, was often been followed by a block of weight training that was made redundant once teams hit the grass for the part of the season that really mattered.

When championship time kicks in, it’s about being first to the ball; beating an opponent or chasing down a lost cause, with progress to the next round hinging on the finest margin.

“This (training phase) coincides with the type of weights you are doing,” Paul continues.

““That’s all thought out and tailored so you are not losing those (strength) benefits. What you are doing in the gym is deliberate to coincide with what you are doing on the pitch. Ollie had been doing that with Sleacht Néill for years.”

McFlynn throws Glen’s Senior Championship winning preparation under the same umbrella. On evenings, while coaching at underage sessions, he’d see Ryan Porter outline a short gym session for players before hitting the pitch. All-Ireland intermediate champions Steelstown have a similar approach, a set of reps to activate the body of action.

Now, fitness isn’t a chore, but rather a lifestyle choice. 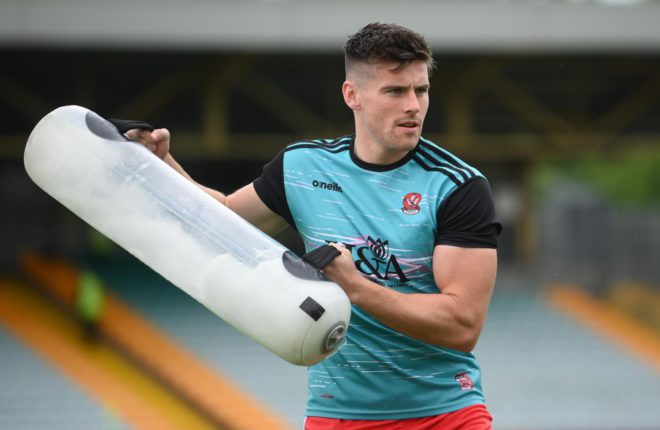 “It’s only from observations, looking in and chatting to people, but I think there are less young people that are involved in sport that are taking alcohol. There is not the same drink culture you’d have had years ago,” McFlynn said.

Nights out are capped, players are swapping buns and filled sodas for chicken and pasta. A bottle of water is a fashion accessory almost.

“If they are meeting up, it’s in a coffee shop…they are not going to the pub,” he adds.

“There is a real shift there. I think it can only be good for the game and people in general lifestyle.

Championship and individuals aren’t won in coffee shops or gyms, but the changing world of sport and preparation has come full circle.

It’ll be interesting to see what the MacRory team of 2048 looks like.