AINE Tubridy, the Antrim and Naomh Pól player pointed out that in 2019, when their club reached the All-Ireland Intermediate Championship final, tactical use of restarts was very important.

The Belfast club had been playing senior football before 2019 but dropped down to intermediate level as they felt that they were not developing when they met those stronger teams.

So, in 2019, they won Antrim, and Ulster and then moved into playing the All-Ireland series.

They reached the final and played Naomh Ciaran. For long periods of that game it looked like the Antrim side were going to win. However, a late sin bin in the game, along with a one-dimensional kick-out strategy led to their demise.

Tubridy explained: “It took a long time for them to click on to our kick-out strategy, but when they did we genuinely didn’t have an option. Our keeper couldn’t seem to find a player in the last 10 minutes. I think if we had have had another plan we would have been fine. That is something that we have taken from that game.”

Now that wasn’t the only issue that led to their defeat. They didn’t have Saoirse Tennyson or Ciara Brown who were two good players. However, Tubridy felt that they were good enough to win on the day.

The strategy was important during their run through the provincial series. Two attacking defenders would show for the ball on either side of the ’keeper and she would choose which one to play it to. She would make a signal that she was going to go short so the whole team would know. That signal meant that the team would hand pass out of defence.

Their manager Brian Coyle preferred hand-passing out of defence rather than kicking.

They would hand pass the ball to midfield and then they would go for a pass inside. The other option was for the team to bunch together in the middle, drawing the opposing team’s players to the centre of the field. That created space on the wings for the goalkeeper to kick into.

“We didn’t stick to the strategy all the time in Antrim, but we did use it a lot in Ulster and a lot of time was spent on it.

“We were trying to go with a short kick-out. A lot of our younger players were very comfortable on the ball so if we went with the short kick-out it created an overlap.

“If you watched our games against St Gall’s that year. There was a short kick-out and one of the girls received the ball, we had five hand passes and (then a) goal.”

Tubridy said that the plan was to create quick movement through the field in order to surprise their opponents. However, it was also about playing to the team’s strengths

“Sometimes I think we were doing a long kick-out and because we are a small team we were getting beat in the air, that was creating an overlap for the other team.”

But in the All-Ireland final, the Naomh Ciaran team worked the Naomh Pól strategy out, and instead they marked space on kick-outs rather than sticking with their players.

“They worked us out. We couldn’t seem to get possession because we were a player down (because of the sin bin decision). That was the reason that beat us in the last minutes.”

So going forward the club have looked at ways of developing their restart strategy so that they can become more adaptable.

“It is something that we need to work on. We need to get back to playing football so we can work on our strategies.” 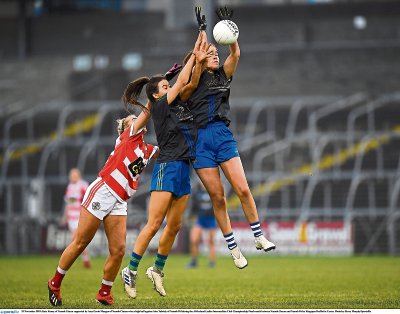