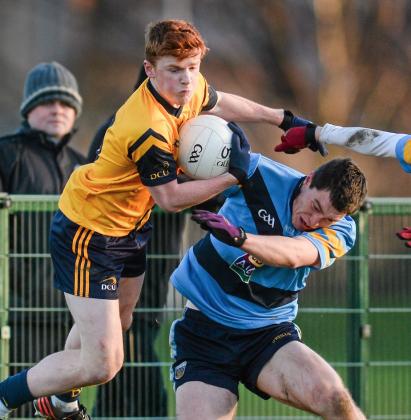 UCD captain Ryan Wylie is pleased with his team’s preparations but rejects the favourites tag for the Sigerson Cup.

The Monaghan footballer is one of many top-level stars that will be on display in this year’s prestigious university competition.

The Ballybay native is already experienced beyond his years. The 21-year-old was nominated for GAA Young Player of the Year award in 2015 after a fantastic season with Monaghan as his team won the Ulster Championship.

For now though, his focus is on UCD and the first game of the Sigerson, where they will play Trinity College Dublin or NUI Galway, who meet this evening.

“We are going well. We had a good league campaign but we are not getting ahead of ourselves,” said Wylie.

“Teams take the Sigerson more seriously than the league. We can’t afford to stay still and we have to keep improving.”

UCD beat DCU to win the Ryan Cup back in November and, as a result, the bookies have priced them at 3/1 to follow it up with a Sigerson success. Wylie, however, is looking no further than their first outing.

“People have called us favourites but you can’t get a true understanding through the league. Our first game is against Galway or Trinity so they are our biggest rivals at the minute. We can’t really look past that first game. It takes all of our focus now.”

This will be Wylie’s final year for UCD, where he studies Radiography. He speaks glowingly of his time there and points out the many ways that sport in college has developed him as a player and as a person.

“The social aspect is probably the most important thing about college football. I met a lot of my friends in college through my time playing Fresher’s football. And I am sure when I leave college; I will remember them the most.

“It is also beneficial that you can learn from top players from other counties, and I’m always interested in the way they play, the different attitudes that they bring to their game and look to apply that to my own game.”

Nevertheless, final year study is tough and Wylie has a lot of responsibility on his young shoulders. There have been complaints about player burnout in the media, with proposals to get rid of some of the commitments that elite young players face with club, county, college and underage football.

“It’s tough enough to balance college work and football. The main way I do it is to just plan at the start of the week what you have got on,” he said.

“Then, you need to map out how you can fit in study and where you have to fit in your gym and training sessions.

“You have to give equal time for everything. You need to have your down time as well, which can be tough to fit in sometimes.”

Wylie is against any changes to the u-21 All-Ireland Championship however but admits that player burnout is an issue in the game.

“Personally, I think the u-21 Championship should stay, I had good experiences with it. Sure, it is a busy schedule and sometimes you find it hard to fit everything in, but if you have good communication between managers of different teams, it is a lot easier.

“A lot of player burnout is to do with the mental side of the game. It is easy to let everything get on top of you but you have to stay one step ahead. Usually if you feel tired, you just push through it but if you don’t feel up to it, you shouldn’t be afraid to tell a manager.”

Aside from winning the Sigerson Cup, Wylie has ambitions to replicate the success that Monaghan have had recently in the future. In past two seasons, he has been involved in two Ulster finals. Unfortunately the team has failed to make it past the All-Ireland quarter-final stage with Tyrone ending their hopes in two of the last three seasons.

Monaghan have been one of the strongest teams in Ulster in recent seasons. Yet unfortunately, they have failed to progress past the quarter-final stage, falling to Tyrone twice in three seasons.
“It is hard to fingerpick one thing that will enable us to jump to the next level,” said Wylie.

“We had a couple of great years there with Monaghan and Malachy (O’Rourke) has looked at a few new players in the McKenna Cup. Hopefully that will give freshness to the whole team and elevate us.”

Joining Wylie on the Monaghan teamsheet is his older brother Drew, the pair forming two-thirds of the full-back line. Family is very important for Wylie, although when out on the pitch, Drew becomes just another player.

“Maybe looking back in a few years I will appreciate that I am playing with my brother more but at the minute he’s just another team mate. The novelty at this stage will have worn off as we’ve been in team together for a few years. You just hope that he’ll perform his best for the team like everyone else.”

The entire Wylie family has been a great influence for Ryan, as has their next-door neighbours – the Finlay family.

The late Kieran Finlay was a star of the late 70s and early 80s for Monaghan. His son Paul has been a stalwart of Monaghan football for the past 13 years. Both players have been affectionately known as ‘Jap’ and have been renowned in Ireland for their stylish forward play.

“The Finlays have been a big influence in all of our careers, especially Kieran who sadly passed away. When I play for Monaghan, Paul looks out for me and gives me advice.”

A stylish corner-back himself who has been backed by two Monaghan legends, it is hardly surprising then that Ryan Wylie has become such an asset for Monaghan and UCD football. A big year awaits.