A LOOK in the mirror helped transform Sean McDermott’s from the nearly men of Monaghan into an unstoppable force on a march to win the junior title.

After an opening day draw with Aghabog in the group stages, they won their next three games to book a quarter-final spot ahead of their final outing with Drumhowan.

“Drumhowan are a decent side and we played very poorly,” he added. “Even though we had qualified, we still wanted to win that game.”

It was time to take stock ahead of the knock-out stages. Drumhowan’s running game had ‘opened up’ their defence.

“There was a wee bit of reflecting done,” said Larkin. “A few guys would’ve had a wee look in the mirror, myself included, because we felt we made mistakes on the line that day.

“Maybe we didn’t like what we saw when we took a look at ourselves and everything stepped up a gear after that.”

Larkin, who leads an entire management team of local club men, played on the last side to win a championship in 2002, the intermediate title which they backed up by winning Ulster. He has 2002 winning captain Niall McGuirk and Conor McElvaney on board. Another player, Michael McMahon, now resides in Donegal but hasn’t forgotten his roots.

“He has driven up and down the road from Ballybofey three times a week at his own expense,” Larkin adds. Training has been brilliant from the word go and it always has been with these guys.”

Farney county star Niall Kearns, who Larkin said is a ‘super young fella’, is among a group of senior players that have led by example. Their strength, he insists, is in the collective group.

“They show you how training should be done and the young lads just need to look them.”

The reward came in the shape of wins over Killeevan and Oram as they reached the final where they ran out 2-12 to 1-6 winners over Toome.

Going into the final, Sean McDermott’s lost their previous six finals – four in championship and two in the league – in a six-year spell. They all came at junior level apart from a one-point defeat to Doohamlet in the 2018 intermediate decider.

On Saturday, Larkin leads his side back into the Ulster arena against Cookstown. While he has watched the Tyrone champions’ win over Eskra and knows the task at hand with the population base Cookstown are picking from, he is upbeat.

“We’ll have a good hour of work done if we beat them, but I would be confident going into it that we’ll give a very good account of ourselves.” 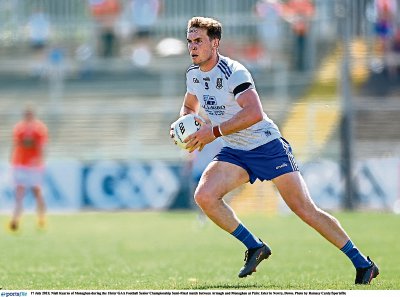