SCOTSTOWN will be going all out to win Saturday’s league semi-final with Magheracloone regarding it as a bonus game ahead of their Ulster championship opener next month.

Colin McAree’s side face the winners of St Eunan’s and Glen as they set out on the road to land a first Ulster title for the Farney giants since 1989.

“The boys are ambitious and we want to go strong at the weekend as far as we can,” he said. “There is a four-week layoff and that’s not great. We see Saturday as a good opportunity and we will see if can we kick on and get the weekend out of the system. We have to get ourselves right for that quarter-final game.”

Scotstown won their 21st Monaghan championship with a 1-13 to 0-10 win over Truagh, with Conor McCarthy notching their goal in stoppage time.

“We played Truagh in the group stages and we felt they’d be as good as any side,” McAree added. “Up to 10 minutes into the second half it was a tight game. We got a couple of key scores at important times coming up to the water break.”

With the Ulster campaign on the horizon, they will be hoping to go one better than 2015 (Crossmaglen) and 2018 (Gaoth Dobhair) when they came ‘within a whisker’ on final day.

McAree was in the backroom team on that wet afternoon in the Athletic Grounds when Rory Beggan missed a late chance to win the game in normal time.

It was Crossmaglen’s 11th title in 20 seasons and you have to go back to 1991 and Castleblayney’s win on a day when Eugene ‘Nudie’ Hughes starred in a 0-8 to 0-6 win over Killybegs.

“There have been more recent winners from Derry and everywhere else than has been from Monaghan,” said McAree. “It (Crossmaglen’s record) is phenomenal and I don’t think there will be many teams that will emulate that over the next 15 or 20 years.

“The province is so tight and there are so many good teams going into the competition. It is hard to see how a team could take a stranglehold like that…but who knows.”

Scotstown have the advantage of running their eyes over Glen and St Eunan’s in O’Donnell Park on Sunday week.

“We’ll probably head up to Letterkenny and from seeing them playing, that’s another level from what we’ve played,” McAree added.

“From watching them so far, both of them are serious outfits and proved that in their own championships.” 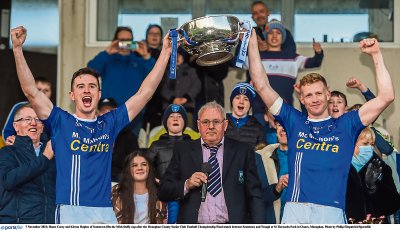