IF the Saffrons are going to inch one step closer to achieving redemption for last year’s All-Ireland Intermediate final defeat to Down, they’re going to have to do it the hard way.

Their semi-final opponents, Galway seconds, have been in absolutely incredible form throughout the championship, hammering teams left, right and centre.

But Antrim have shown a great deal of progress this season, and were on top form in their quarter-final victory over Kerry on Saturday, cruising to a 4-17 to 1-7 victory.

Roisin McCormick was in brilliant form in front of the posts, scoring 2-6 on the day, while Caitrin Dobbin was also in fine form, weighing in with 1-3.

Moreover, they accrued hardly any wides so they really seem to be nearing the peak of their potential, while they also welcomed back Maeve Kelly and Amy Boyle from injury.

The Antrim management team will also be wondering whether to start subs Anna Connolly and Ciara Laverty, as they really staked a claim for selection in their time on the pitch against Kerry.

Galway, meanwhile, skipped the quarter-final stage as they topped their group with wins over Carlow, Dublin and Meath. Antrim’s recent win over Kilkenny will have given them confidence that they can cope with the traditional powers, and they seem to be hitting form at the right time.

REIGNING All-Ireland Premier Junior champions Armagh are one game away from booking their place in the decider for the second year running.

The Orchard county struggled for consistency in the earlier part of the season, but they’ve made improvements as the championship has wore on, and claimed a deserved quarter-final victory over Limerick in Kinnegad on Saturday.

Mattie Lennon’s side were on the ropes early on, trailing 2-4 to 0-4 at the water break, but they showed commendable character to work their way back into proceedings, eventually winning out by 1-16 to 3-8.

Their star performer was this year’s captain Ciara Donnelly, who scored 12 points across the hour, while her sister Leanne scored a crucial goal on the cusp of half time.

Their defence was also superb, limiting Limerick to a miserly 1-4 for 45 minutes of the game, and they’ll be hopeful of getting a result against Roscommon, who had the upper hand in their own quarter-final win over Cavan without ever looking totally comfortable. Armagh seem to be timing their run to perfection so we’ll give them the nod to proceed to a final against the winners of Clare and Wexford.

LAST year’s Nancy Murray Cup final didn’t go according to plan for Tyrone, so they’ll be hoping to make amends when they face Mayo this Sunday.

They were a distinct second best when they lost by Cavan by 2-14 to 1-3, but they’ve made obvious improvements this year and will be hopeful of giving a better account of themselves against Mayo.

Declan Sherlock’s side already faced Mayo in the competition, losing by 3-9 to 1-6, though the game was delicately poised until a disputed second-half goal nudged Mayo ahead and a rattled Tyrone never recovered.

Tyrone subsequently made sure of their place in the final with victory over Wicklow, but a big issue is the situation facing dual stars Grainne Rafferty and Regan Fay. Both are set to line out for the Tyrone ladies team in their must-win relegation battle against Tipperary on Saturday, and 24 hours they’ll turn their attentions to the camogs.

It’s not an ideal situation and arguably shows a lack of joined-up thinking between the LGFA and the Camogie Association, but Fay and Rafferty played for both codes last Saturday and handled things superbly, travelling to Inniskeen straight after playing Cavan in Clones for the ladies.

Tyrone also have threats all over the pitch – Aisling Begley was superb in defence against Wicklow, while Niamh McNulty, Roisin McErlean and Ailse Coyle are richly creative players. Their panel is in better shape than when they lost to Mayo a fortnight ago, so they’ll be hoping of making a better fist of things on this occasion.

IT would be massively disappointing for the Tyrone ladies if they lose to Tipperary this weekend.

The Red Hands have harboured aspirations of cementing their status as a serious senior team, but things haven’t really gone to plan under their new manager Kevin McCrystal and they’re now one defeat away from relegation.

A number of girls were unable to train in the lead up to their relegation play-off defeat to Cavan at the weekend due to Covid issues, and while they named a strong team on the day, they ran out of steam in extra-time, eventually losing out by 2-11 to 0-14. That result means they now must overcome Tipperary to stay in the Senior Championship for another year.

Tyrone lost to Tipperary in the All-Ireland Intermediate final back in 2017, but their opponents morale must be low after being tanked by Kerry, Cork and Meath in their last three matches.

With that in mind, Tyrone will quietly fancy their chances, especially if they can get top performances from Grainne Rafferty, who gave an absolutely tireless display against Cavan, and Niamh O’Neill, who scored six points against the Breffni county.

FERMANAGH’S Intermediate Championship status is on the line in Saturday’s relegation play-off against Longford.

Jonny Garrity’s side have one last chance to avoid the drop following their disappointing 5-9 to 4-7 defeat to Division Four side Offaly at the weekend.

Fermanagh did have good purple patches – at one stage scoring an unanswered 1-4 – but they trailed for almost the entirety of the contest and now must dispatch Longford to stay up.

The Leinster outfit are in this position followed a relegation play-off defeat to Roscommon at the weekend, losing by 3-9 to 1-10, but they’ve been competitive in practically all their matches across league and championship.

That makes this an extremely difficult tie for Fermanagh, who’ll desperately want to avoid suffering back-to-back relegations following their recent demotion to Division Four. Manager Garrity admits he will weigh up his Fermanagh future when the season ends, so he’ll be just as motivated as his players to deliver a result. It’s a tough one, though. 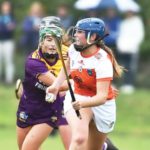