Advertisement
HomeCountiesDonegalDonegal FootballOpening Shot – Donegal have nothing to apologize for
Advertisement 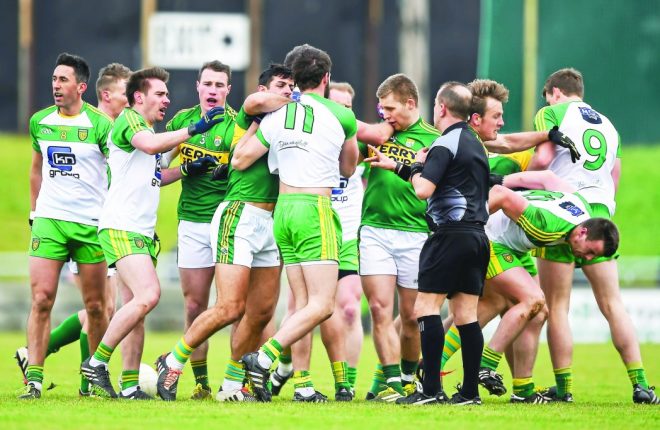 When Eugene McGee assumes his Colonel Blimp persona you know a bit of craic is afoot. McGee was in the Irish Independent earlier this week giving us his, ‘Oh it makes me mad!’ line about the antics that unfolded in Tralee on Sunday.

Being otherwise occupied in Brewster Park on the day in question, I didn’t get to watch the full Kerry v Donegal game, but the highlights I’m saw were enough to ensure I sure as hell won’t be missing the next one.

I have to admit to being surprised by people’s surprise at how narky things were in Austin Stack Park.

Kerry clearly fear Donegal. They’ve feared them since their first ever championship encounter back in 2012 when the 1-12 to 1-10 in the All-Ireland semi-final result failed to fully reflect the mastery the Ulster men had over the Kingdom.

In the 2014 All-Ireland final they knew they couldn’t beat Donegal if it came down to a football match, so Eamon Fitzmaurice and company ensured that it didn’t. They got a score less than Donegal that day, but they got the win and that’s all that matters, isn’t it?

Again, last Sunday, the fear was palpable. The points were a secondary consideration to Kerry’s desire not to lose.

Again the Kingdom ensured that the game didn’t descend into an ordinary decent football match. Determined to lay down the law on their home patch they were in Donegal faces from the off.

What happened next was predictable.

Football is a test of skill, yes, but it is also a physical game and when a physical challenge is presented it demands a response. Not to respond concedes a psychological advantage. Kerry footballers are born knowing this most basic of competitive equations.

But Donegal aren’t competing at the very highest level for no reason. They repaid Kerry’s coin in kind. Indeed, they had little option if they entertained any notions of winning in Tralee. They had to meet the physical challenge.

It may have disagreed with some of the queasier constitutions watching, but for the rest of us it was compelling, shout-at-the-telly stuff. It isn’t that we have a prurient lust to see blood soaked jerseys. But at the same time nothing says passion, commitment, desire, drama like a blood soaked jersey. And those, after all, are the primary reasons why we all watch sport.

This is the point that Eugene McGee and his ilk miss. Sport is a variety of theatre, except it’s better because it’s drama is unscripted. Indeed unpredictability is a core part of what makes sport entertaining. Much of what made Sunday’s came so compelling for those watching what that element of what the hell is going to happen next?

A huge part of the problem with modern football is that managers have tried to script every aspect of the game, so far as it’s in their power to do it. That went out the window on Sunday and, although we might have had a car crash of a game, you couldn’t take your eyes off it.

After Sunday’s match is there anyone in the country who isn’t hoping these sides meet in the latter stages of the championship? If they do we know it’ll be a titanic contest of will and skill.

We all know Croke Park wouldn’t be fit to meet demand for tickets. That tells its own story, and much more eloquently than the sanctimonious harumphing of our pundits.